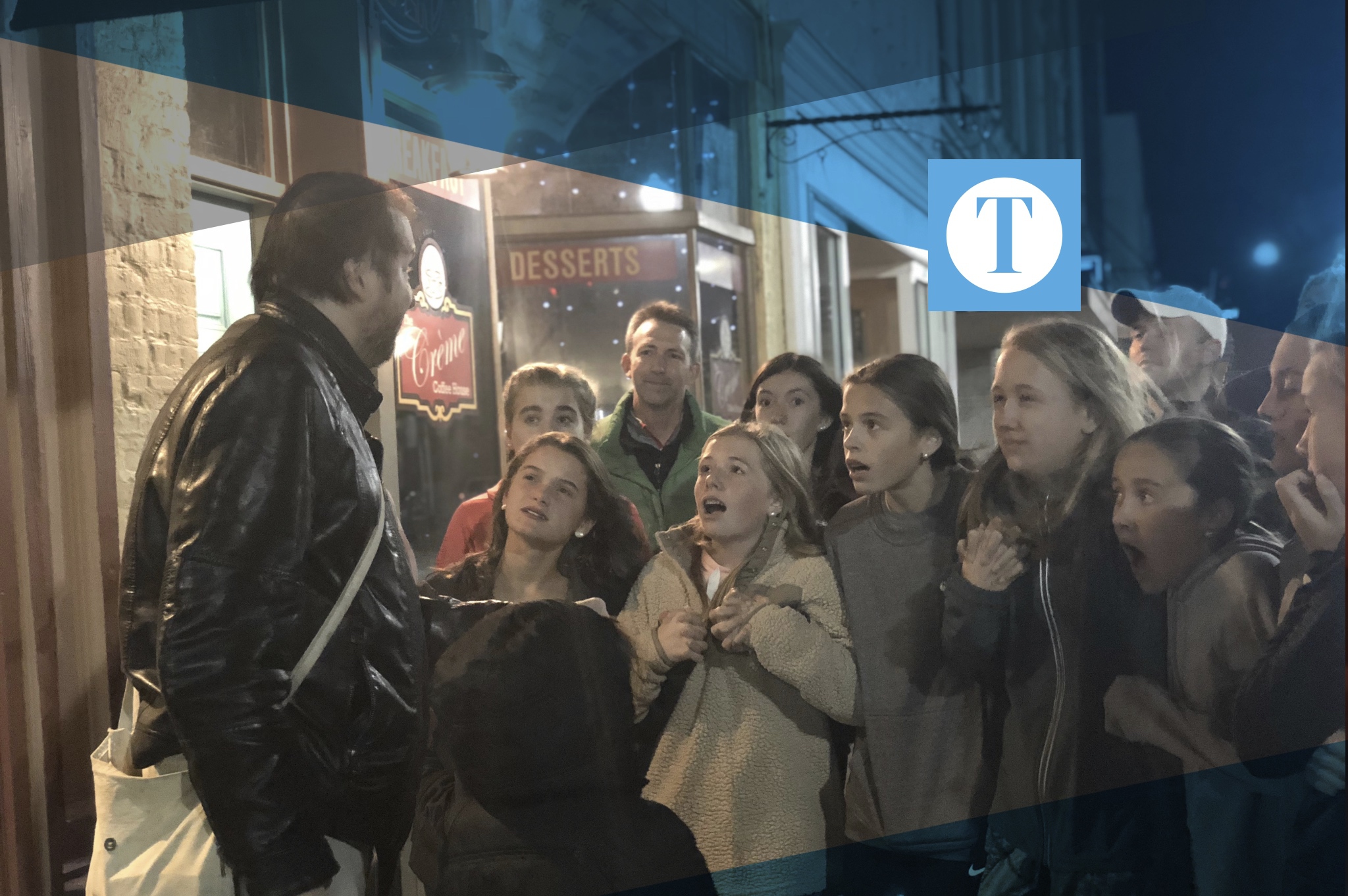 Wolfe led the group down 2nd Street, stopping at select businesses and locations to share their creepy histories. | Photo by Katie Pickens

On a blistering cold Saturday night in downtown Owensboro, a group of 25 to 30 braved frigid winds as they listened to a series of historical, local ghost stories from David Wolfe II. Wolfe, owner at Haunts of Owensboro Ghost Walking Tours, has been sharing the city’s local hauntings with tour groups since 2007.

Saturday’s walking tour started at 8 p.m. as Wolfe led the group down 2nd Street, stopping at select businesses and locations to share their creepy histories. According to Wolfe, some of the most haunted places include the second floor of The Creme Coffee House, the front lawn of the Daviess County Courthouse and The Famous Bistro.

Wolfe engaged his audience with not only stories, but also enthusiasm. In displays that included a waving of arms, changing voices and gathering audience members as volunteers, Wolfe’s customers were enthralled by his performances, audience interactions and historical references.

One of Wolfe’s creepiest stories revolved around a young couple who lived above The Creme.

“That second floor is so haunted — literally — they could put it on a movie or a documentary itself,” Wolfe said to the crowd.

Wolfe, who’s actually been interviewed by the History Channel for his knowledge of ghosts and other paranormal anomalies, said the building first opened around the 1880s. Originally a music store, the now-coffee house has been using the upstairs floor as a rental space. The first tenant, according to Wolfe, said the very first night of the young girl’s stay, she experienced the front door opening and shutting on its own, as well as a series of “clomping footsteps” walking from the first to second floor.

Upstairs in her living room, Wolfe said the same girl heard the sound of someone sitting down on a squeaking couch cushion in her studio apartment.

“She’s so scared, she’s alone, she clicks on the light and gets ready to call the cops, and–nobody’s there whatsoever, folks,” Wolfe said, adding that the same event happened so many times that the first tenant to ever stay in the upstairs loft moved out.

According to Wolfe, a similar series of hauntings happened to the second tenant who moved in. The second girl came to Wolfe with documentation of the events that occurred, which Wolfe said, again, held enough evidence to make its own documentary.

For those interested in hearing more about Wolfe’s Haunts of Owensboro tours, call (270) 313-5569 or visit www.HauntsofOwensboro.com.