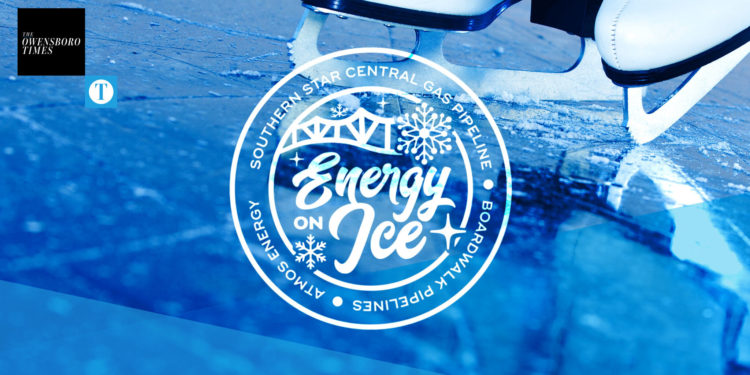 Outdoor ice skating is coming back to Owensboro this winter. Through a local corporate partnership that will last through 2027, “Energy on Ice” will be an outdoor skating rink in downtown Owensboro created using no taxpayer money.

The rink will be the main attraction for the new Winter Wonderland, an annual event that used to be held in Owensboro.

Energy on Ice will be located on McConnell Plaza (behind Hampton Inn & Suites Downtown Owensboro/Waterfront) and be open on Fridays, Saturdays and Sundays beginning Nov. 27.

The 80×60 rink, made of synthetic ice also utilized by NHL teams, is not dependent on weather or temperature which allows for year-round usage. The Owensboro Convention Center will manage the operations.

“The outdoor ice skating rink will be a wonderful amenity for not only residents but visitors too,” said Mark Calitri, President & CEO Visit Owensboro. “We view the rink as an incredible tourist attraction that will bring people to Owensboro to spend money thus fueling our local economy.”

The project was first announced by the Owensboro Daviess County Convention & Visitors Bureau on their social media pages Thursday morning.

Energy on Ice is possible due to an innovative partnership between Southern Star Central Gas Pipeline, Atmos Energy, Boardwalk Pipeline Partners, and the Staton Family Foundation.

“We wanted to form a unique partnership to bring outdoor skating back to Owensboro and create an opportunity to bring people from across our community and our region to our downtown area,” Buzz Backstrom, VP Marketing and Business Development of Boardwalk Pipeline Partners.

Southern Star President and CEO Jimmy Staton said, “Quality of life is an important value here in the Greater Owensboro area. We are absolutely thrilled to be adding to that quality of life.”

“This project highlights that partnership with each of them working together along with the City of Owensboro, Visit Owensboro, Owensboro Convention Center and the Greater Owensboro Chamber of Commerce,” Brake said in a release. “We are proud to be part of this partnership and look forward to the years ahead of a Winter Wonderland this great partnership brings.”

In the video, Mayor Tom Watson said the outdoor rink was one of the ideas that kept floating to the top of every focus group as part of the OBKY project to discuss ongoing happenings in the City.

“Through the auspices of great community citizens and great corporate citizens,” Watson said, “Winter Wonderland is going to make a return to Owensboro for outdoor skating.”