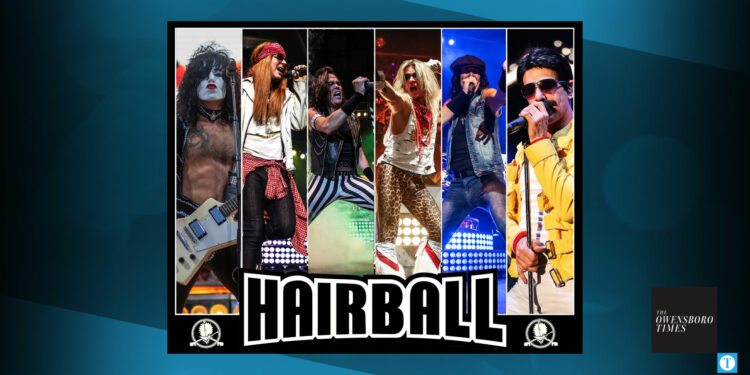 Hairball, a Rock & Roll cover band that takes pride in their high-energy concerts, is returning to the Beaver Dam Amphitheater on September 24 with special guest Resist & Bite.

Advance tickets range from $15.50 for Lawn GA to $50.50 per person for Lower Arena Reserved Tables. Reserved Tables are only available as a 4-person table ticket. Prices increase by $10 per person on the day of the show if tickets are still available.

Hairball describes themselves as follows:

A band puts on a concert – Hairball puts on an event! Hairball is a Rock & Roll experience you won’t soon forget. The lights, sound, smoke, fire, bombs, and screaming hoards of avid fans…to merely call it a concert would be like calling Mount Rushmore a roadside attraction!

Vocalists Joe Dandy, Kris Vox, and Dave Moody lead the band through a 2+ hour, mind-blowing, and drop-dead accurate homage to some of the biggest arena acts in the world. Van Halen, KISS, Motley Crue, Queen, Journey, and Aerosmith are a few of the acts fans will see brought to life. The Hairball stage becomes an entirely new rock concert before your eyes countless times throughout the night.

The motor that drives the Hairball dragster consists of HBK on the electric bass, Billy on the drums, and Happy on the lead guitar. These Rock & Roll soldiers pride themselves on nailing some of the most memorable licks and chops of all time while adding their own style and flair that they’ve cultivated over decades of tireless performing. This isn’t a side job. These guys eat, sleep and breathe Rock & Roll!

The band spent most of 2019 writing and recording. They made themselves public to the world in February of 2020. On Feb. 29, the band self-produced and released their first song The Myth I’m Livin’ which has since achieved much positive reviews worldwide.