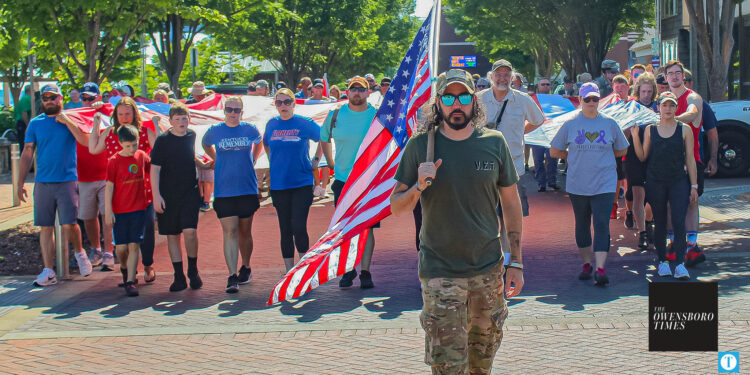 More than 50 people showed up Monday morning to take part in the first part of the annual 11-mile Memorial Day Walk to honor the memory of local veterans who have died. Additionally, 100 flags were also placed near the Charles E. Shelton Freedom Memorial to represent “a soldier that did not come home.”

The event was created by U.S. Army Veteran Derek “Doc” Van Tuyl, who was a member of the 101st Airborne stationed at Fort Campbell, Kentucky. He was a combat medic and completed one tour in Iraq (2004-2005) and one tour in Afghanistan (2008-2009). Van Tuyl is a native of New York and has resided in Owensboro for almost 10 years.

“Today is the day we stand here and remember all of the men and women who died while protecting the very ideals and freedoms we all cherish today,” Van Tuyl said. “Today is not about the service. It’s about their sacrifice. It’s about the mother and father, the husband and wife, the brothers and sisters, son or daughter — all those who lost a loved one fighting on foreign soil.”

As a tribute to several of his fallen comrades and as a way of healing, Van Tuyl started a memorial walk in 2008.

“April 29 was the anniversary of a tragic day in Afghanistan, the day that America lost a young hero and many others were injured,” he said. “It was a hard day for me. I knew I was going to be sad. I just didn’t know what I was going to do about it. I did know that I didn’t want to sit at home alone or tip a bottle and forget.”

He laced up his boots, grabbed his flag, and headed out the door, no clue of where he was walking. He trekked down KY 54 and eventually ended up at the Gold Star Family Memorial at Smothers Park. Van Tuyl said he walked nearly 17 miles that day.

“The pain in my legs and feet that day paled in comparison to thousands of families that have sent a loved one to war never to return,” he said.

The first leg of this year’s 11-mile loop began at 9 a.m. at the Shelton Memorial in Smothers Park. Dozens of attendees helped carry a giant American flag down Veterans Boulevard to the front of the Owensboro Convention Center. After, a group of those continued across Owensboro, with the halfway point being Van Tuyl’s house, which also had 89 flags in the front yard.

Cathy Mullins and her family know that pain. Since losing her son Brandon nearly 11 years ago, Mullins has been a fierce advocate for fallen veterans and honoring their legacy.

Mullins said she is inspired by the phrase “honor the fallen by challenging the living.”

“Memorial Day is a day to take that moment and just remember their sacrifice and just soak in the gravity of it, but then also to just celebrate their lives,” Mullins said. “So go ahead and honor and remember and enjoy the day because [the fallen soldiers] would not want you to be sad all day long — they would want you to go and go on out and live.”