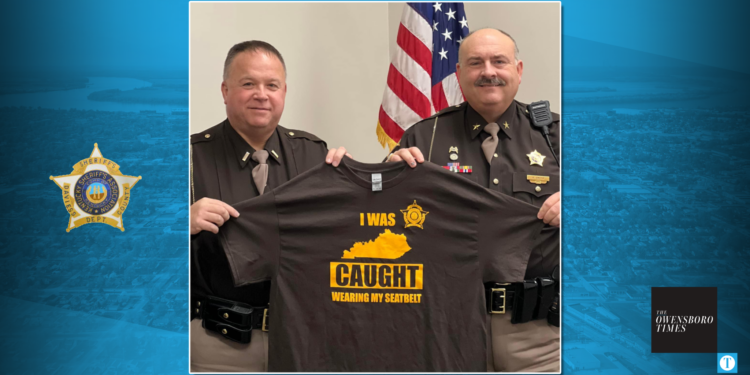 The Daviess County Sheriff’s Office is hoping to catch people wearing their seatbelts. In a new initiative to kick off 2022, DCSO will try to bring seat belt awareness by rewarding those wearing seat belts.

“The main objective is to promote seat belt usage and overall awareness of how important they are when you’re involved in an accident,” Sheriff Barry Smith said. “The statistics are staggering, with over half of Kentucky fatality motorists not wearing seat belts. If we can promote seat belt awareness, in a different way than issuing citations, and it saves someone from injury or death, then that’s a worthy initiative.”

According to DCCO, the seat belt usage rate in Kentucky is below the national average. In 2020 Kentucky endured 780 fatalities. Of those, 56.9% were not wearing a seat belt.

“Many of those lives could have been saved had they taken the time to wear a seat belt,” a Facebook post from DCSO reads. “Every year our office coordinates with the Kentucky Office of Highway Safety during campaigns to enforce traffic violations, hopeful to lower traffic collisions and the overall injury/fatality rate. Our office decided to start 2022 off with a different strategy.”

DCSO will be conducting safety checkpoints and handing out T-shirts that read “I was caught wearing my seat belt” as a way to thank those wearing seat belts plus reinforce the safety aspects surrounding seat belt usage.

Officials wrote in the social media post, “We look forward to these checkpoints and hope we find everyone buckled up.”