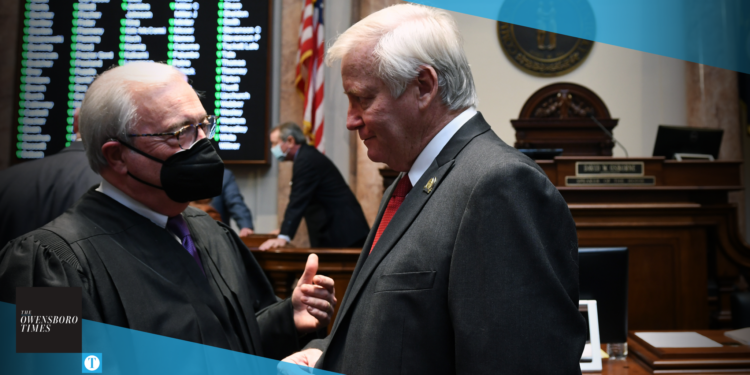 Rep. DJ Johnson has again filed legislation that would ultimately add a second Family Court Judge in Daviess County, and without pulling a judge from another circuit.

Johnson’s House Bill 214 is meant to address judicial workload disparities statewide and rebalance those workloads. It would specifically address the shortages in Family Court Judges and add seats where they are needed the most — such as in Daviess County.

In 2015, the Administrative Office of the Courts (AOC), at the request of the General Assembly, found these critical imbalances. The General Assembly acknowledged these results, but Johnson said the legislature has never acted on it.

Essentially, the bill uses those evaluations to more evenly balance workloads. To even that load takes a combination of redistricting a handful of judges, eliminating those who are underutilized, and adding judgeships in a few places that need the extra help.

As it applies to Daviess County, which makes up the entirety of the 6th Judicial Circuit, the bill calls for adding one Circuit Judge. It further calls for that judgeship to be designated as Family Court Division.

The new judge would not be pulled from or shared with another Circuit.

Last year Johnson sponsored a similar measure. House Bill 327, which ultimately did not pass, would have made Daviess County’s second Family Court Judge position permanent after combining Hancock and Daviess counties into the same Judicial Circuit.

Johnson said the AOC looked at the numbers and determined that Daviess County still needed a second Family Court Judge, even without Hancock County joining the 6th Judicial Circuit.

That would allow Hancock, Butler and Ohio counties to remain in the 38th Judicial Circuit.

“There were multiple efforts to just convert one of the current judges to a Family Court Judge,” Johnson said. “I fought against that because that does not solve the workload issue. It just transfers it to somebody else.”

If the bill does pass, the position would be added in time to be on the ballot for this fall’s election.

Part of the bill resets the filing deadlines for the position to June. Johnson said he wanted to make sure that any potential candidates had plenty of time to make a decision whether or not they wanted to file for the seat.

The measure was pushed off until the end of the session last year, and some legislators tried to make amendments at the last minute. Unable to reach an agreement, the bill died.

Johnson said he thinks he’s made the right tweaks, and he’s hoping that by getting an early start this year the legislation will get passed.

“I am pushing very hard for this to be a priority issue this session,” Johnson said. “My goal is absolutely to get this passed this session.”