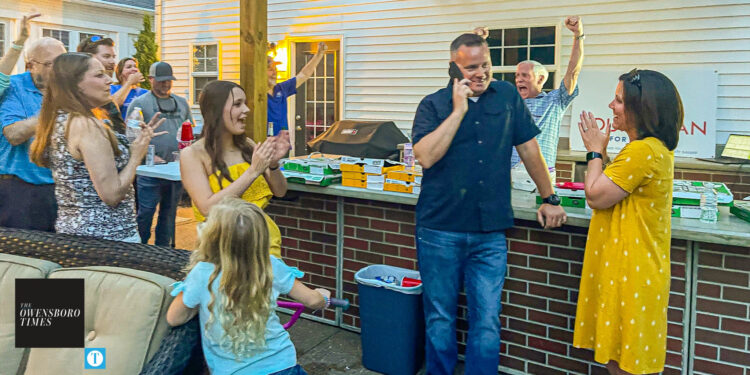 Brad Youngman was elected as the next Daviess County Sheriff, narrowly defeating current Sheriff Barry Smith in Tuesday’s primary. Youngman said he knew the race would be a close one because both candidates had strong qualities, but his coming out victorious showed that voters were ready for changes that he’s ready to implement.

Youngman ended up with 4,631 votes (53%) compared to Smith’s 4,045. With no Democrat candidate filing to run, Youngman will be the next Sheriff.

Youngman said he and his supporters were a bit anxious as the night went on, but that gave way to relief and joy around 8 p.m.

“We were very pleased,” he said. “We put a lot of hard work into the campaign. We had a lot of supporters that were disrupting their lives to make sure that we were successful. When you see that we were, it just made us very, very happy.”

The margin was close during each update as results rolled in.

“We expected this to be a tight race, and we were not surprised that it ended up being that way,” Youngman said. “We had two very good candidates that the people of Daviess County had to choose between. That’s a reflection of Mr. Smith and his years of experience. My hat’s off to him for running a good campaign. I fully anticipated that this would be a tight race based on the fact that there was no clear person that was just a heads-above-the-other better choice.”

Smith was appointed Sheriff last year following the retirement of Keith Cain, who endorsed Smith as a replacement. Youngman later received an endorsement from the local Fraternal Order of Police.

Youngman said it was hard to describe the feeling of defeating someone already in the seat, especially since the two had served time at DCSO together.

“Barry has been there a long time, and I have a lot of respect for Barry,” Youngman said. “The Daviess County Sheriff’s Office is certainly a great place. At no time were we wanting to indicate that it wasn’t. We just had some different ideas. Having worked there for Barry, there were some things that I knew that I wanted to change.”

He said ultimately, there were some different ideas that set the two candidates apart.

“When we started to sort of frame our message going into this campaign, I talked to several people about what their concerns were outside of the office, on the streets and the families that are out there, and put their concerns together with the plans that I had,” Youngman said. “It was sort of a reflection of, to me, the changes that we all wanted to make. I think there’s a huge appetite for change across this nation right now.”

Youngman said for now he will continue his focus on his current role as the Lead Law Enforcement Officer for Daviess County Public Schools.

“I will spend this summer advancing the goals of that organization,” he said. “We have a lot going on right now there, especially in light of the recent passage of House Bill 63 (which calls on local school districts to place a school resource officer in each school by Aug. 1 if they can afford the cost).”

While he’s making sure the DCPS police is “ready for business” for the fall semester, Youngman said he’ll simultaneously be working on the plans that he has for the Sheriff’s Office.

“I’ll be taking the plans from the idea phase, and start resourcing them so that we can implement them as soon as I’m sworn in this winter,” he said.

Youngman said one of the first things he will do as Sheriff is post the budget online, then he’s going to make sure the department is fully staffed.

“Once we have the basic needs of the streets taken care of, we’ll start working on making that drug unit a reality so that we can start going after drug traffickers,” Youngman said. “Then we can start delivering on some of the secondary and tertiary promises that I’ve made.”