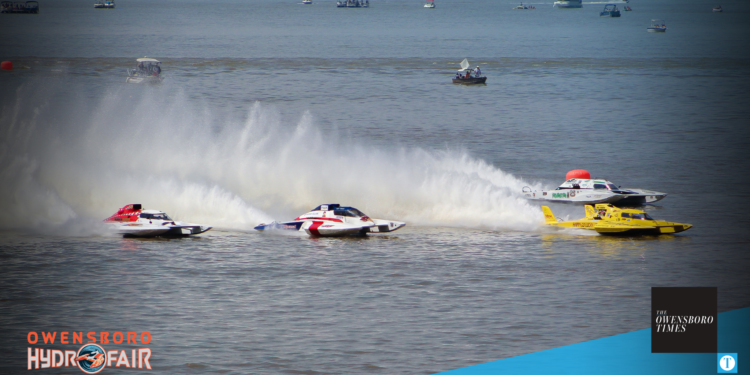 The Owensboro HydroFair returns this weekend, with organizers hoping to bring thrills and excitement to the riverfront. Sixty hydroplane teams separated into seven classes will battle it out on the Ohio River beginning Friday and wrapping up Sunday.

Teams spanning the U.S. and Canada are headed to Owensboro to compete, racing around a 1.25-mile oval-shaped track that begins and ends behind the Owensboro Convention Center. Drivers cycle the route four times, spraying water high into the air as they rip through the river.

“We will run the championship heat for the Grand Prix at 4 p.m. Saturday,” Lientz said. “We have a special trophy for the winner, and you can be sure it means everything to the team who wins.”

The other classes will compete for the APBA North American Championship, with the winners determined on Sunday afternoon.

The APBA is the organizing and sanctioning body for all motorized boat racing in the United States. They will host the APBA North American Championships for eight classes of inboard hydroplane teams, with over 50 teams traveling from the U.S., Canada, and New Zealand.

“Hydroplane racing is huge ‘down under,’ and the Lupton family is bringing two brand new hydroplanes to our event,” Lientz said. “The Kiwis are coming to Owensboro. The father is Warwick, and his sons are Jack and Ken, who have already won races in North America this year.”

Lientz and company are excited to attract teams from all over but said there is equally as much talent here locally.

“The Kiwis, along with the Canadian teams, bring an international flair to the event,” he said. “We also have teams from just a few miles away, such as Evansville and Poseyville. Winning the North American Championship is a prestigious fete.”

Director of Public Events Tim Ross said that even with the amount of rain in the previous weeks, the Ohio River is predicted to lower in the days leading up to the races. Nonetheless, he said the teams are prepared to help clean debris as needed to prepare for the events.

Racegoers are also encouraged to attend the many downtown events surrounding the HydroFair. Friday After 5 features Blanco Brown (famed for his hit single The Git Up), and the Owensboro bridge will be open to pedestrians from 9:30 a.m. to 12:30 p.m. following 5K and 10K races.

Live on the Banks, a free outdoor concert series on Saturdays ,will grace the Overlook Stage and Allen Street Pavillion of Smothers Park. Lights on the Ohio will follow, featuring a pyro-musical performance of synchronized lighting on the Owensboro bridge.