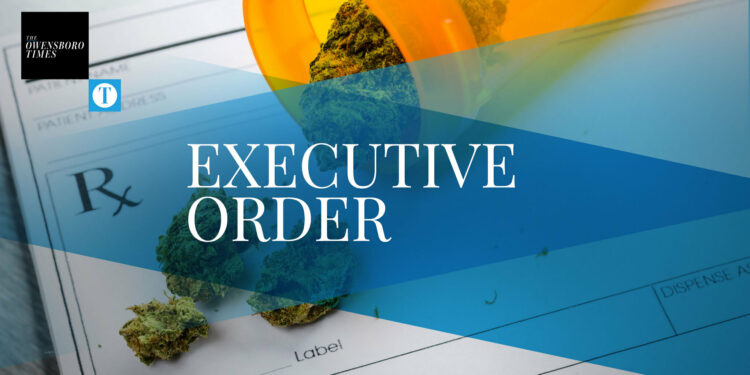 Gov. Andy Beshear has signed an executive that will allow some Kentuckians with certain medical conditions to possess and use small amounts of legally purchased medical cannabis.

State Rep. DJ Johnson and State Senator Matt Castlen both said they needed more time to review the announcement before deciding whether or not they wanted to comment. State Rep. Suzanne Miles did not respond by the time of publication. This story will be updated if any of those local legislators decide to respond.

The order goes into effect January 1, 2023, residents must meet specific requirements, including:

Those 21 medical conditions are:

“Kentuckians suffering from chronic and terminal conditions are going to be able to get the treatment they need without living in fear of a misdemeanor,” Beshear said. “With 37 states already legalizing medical cannabis and 90% of Kentucky adults supporting it, I am doing what I can to provide access and relief to those who meet certain conditions and need it to better enjoy their life, without pain.”

Beshear said that guidance is being created for law enforcement to determine quickly and accurately who does and does not qualify. He stated that he will work with lawmakers this upcoming session to push for full legalization of medical cannabis once again.

The Governor also announced that the state will regulate the sale of Delta 8. Delta 8 contains THC, but at a lower level than marijuana. It is not a controlled substance in Kentucky nor under federal law, and a court has ruled that it is legal in Kentucky.

“Right now, there are no checks on how it is packaged and sold. We must establish a regulatory structure to ensure that Delta 8 is sold and purchased safely in the commonwealth,” Beshear said. “The structure can and will also serve as a template for when the General Assembly fully legalizes medical cannabis. That means we can learn in real-time, train our people and be ready to go.”

The executive orders come after Gov. Beshear formed the Team Kentucky Medical Cannabis Advisory Committee in June to travel the state and listen to Kentuckians’ views on the topic after the state legislature failed to pass legislation earlier this year.

Kerry Harvey, co-chair of the committee and secretary of the Justice and Public Safety Cabinet said, “Our committee met good people all across the commonwealth who are suffering from terrible chronic conditions that are relieved by medical cannabis. This is real-world experience, not conjecture. The Governor’s action will improve the quality of life for these Kentuckians, but more should be done in the coming legislative session.”

Military veterans attending the town halls emphasized the benefits of cannabis in reducing PTSD symptoms. Some described the inability to sleep because of the disorder, while others reported being prescribed numerous medications to ease pain, treat anxiety, sleep or move their joints fully.

Craig Manley, a small business owner from McCracken County, said “Medical marijuana is a way to ease pain without messing with your body. Prescription pain killers and alcohol are dangerous in the construction business, like mine. However, if someone takes THC at night for the pain, they come to work rested and ready to work. I am very conservative and both sides should want to help people. This should have nothing to do with your views politically.”

In addition to the town hall meetings, the state’s medical cannabis website allowed Kentuckians to submit their opinions online. The website received 3,539 comments, 98.64% of which expressed support for legalizing medical cannabis in Kentucky, according to Beshear.

Visit medicalcannabis.ky.gov for a list of advisory team members, which includes Kentuckians with experience in health care, treatment of opioid use disorder and other diseases of addiction, law enforcement, criminal justice and advocacy for medical cannabis.

“This is not a red or blue issue,” Beshear said. “It is about our people and helping those who are in pain and suffering.”