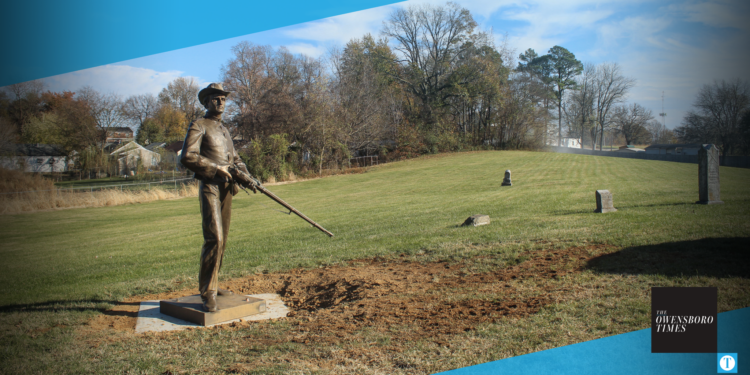 The 7-foot-tall bronze sculpture of a Confederate soldier has moved to its final resting place at Potter’s Field, a pauper’s cemetery adjacent to the east side of Elmwood Cemetery.

The statue previously was the top half of a monument on the Daviess County Courthouse lawn. The statue was removed from the base on May 31 and has remained the property of Fiscal Court, while the granite pedestal was given to the United Daughters of the Confederacy and was moved to the Battle of Panther Creek site on U.S. 431.

An agreement was reached in September between the City and County governments to transfer a small piece of property within Potter’s Field, owned by the city, to Daviess County Fiscal Court.

Potter’s Field, which is also called City Cemetery, spans 3.78 acres. According to a plaque in Potter’s Field, the burial ground served from 1873-2000 “as the final resting place for gamblers down on their luck, average citizens without money for graves and others who died far from home with no one to claim them.”

According to the plaque, “No one is sure how many men, women and children are buried here. It is believed they number nearly 1,000.”

Judge-Executive Al Mattingly previously said that the decision to relocate the statue to Potter’s Field is a way to honor the Citizens Advisory Committee’s recommendation as closely as possible. He also previously said that it was fitting that the statue be moved there, as there are several Confederate soldiers buried in the field and it is as close to Elmwood Cemetery as possible.

The Owensboro chapter of the NAACP was also consulted for the decision because they were the initial petitioners for the relocation of the monument. The new placement of both the sculpture and base fulfills that request, Owensboro NAACP President Rev. Rhondalyn Randolph said previously.

“By putting this sculpture in an appropriate historical context, this gives the community a chance to work together to form an appropriate narrative,” she said at the time the agreement was announced.