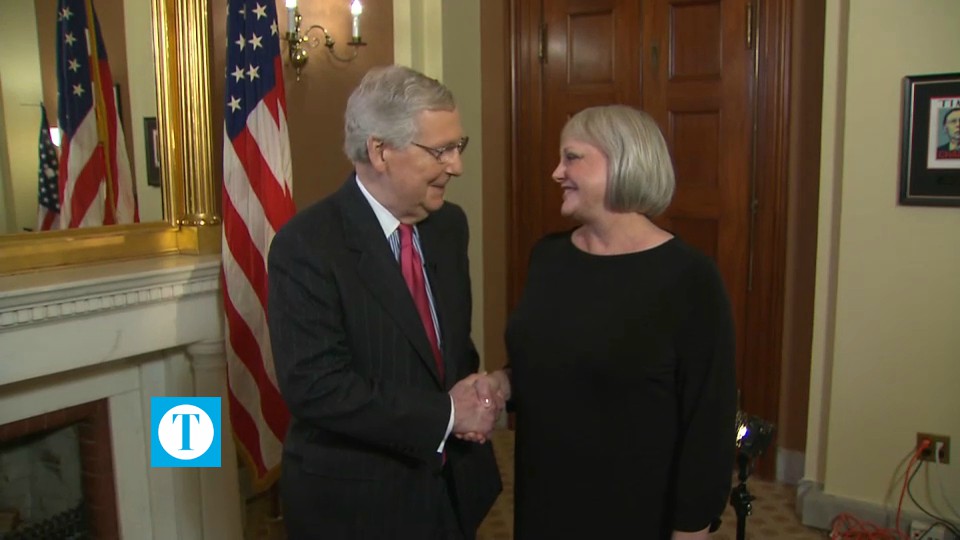 In his State of the Union address, President Trump presented his vision for our country’s future. He articulated our national values, our economic potential, and the needs of families throughout the county. I was proud to once again welcome President Trump to the U.S. Capitol for this important speech, and I applaud his leadership.

Standing together, we will continue making great strides for Kentucky and the nation. As the President said, the State of our Union is strong.

That strength is shown by our country’s booming economy. In Kentucky, families and small businesses are thriving, in part because of the pro-growth and pro-opportunity policies Republicans have implemented at the federal and state levels. For the first time since 2000, a report showed that every county in the Bluegrass State had an unemployment rate below 10%.

In his address, President Trump also renewed his call for comprehensive border security protections. I agree with many Kentuckians who support his request for enhanced security at our Southern Border, including the construction of an effective physical barrier. Democrats must put partisanship aside, stop their calls to “Abolish ICE,” and help advance commonsense policies that will protect American families.

While the annual State of the Union often looks toward the year ahead, it’s also an occasion to review our many accomplishments for Kentucky communities. As Senate Majority Leader, I’ve worked with President Trump to fulfill our promises, and I look forward to continuing to do so in the future.

In just the first year of the Trump administration, we unclenched the Obama-era stranglehold on the economy. Our historic tax reform helped 90% of American wage earners keep more of their hard-earned paychecks. And aggressive regulatory relief gave small businesses the chance to realize their potential.

Since last year’s address, President Trump and I have continued to advance Kentucky’s priorities in Washington. We passed a Farm Bill that helps farmers across the state and includes my legislation to legalize industrial hemp, giving Kentucky farmers, processors and manufacturers the opportunity to explore the crop’s future. For our servicemembers at Fort Campbell, Fort Knox, and the Blue Grass Army Depot, we ended the dangerous Obama-era military sequestration, securing the largest year-on-year funding increase in more than a decade and giving our troops a pay raise they deserve.

We supported Main Street local lenders so they can better serve their communities. We also helped safeguard the vulnerable from human trafficking and delivered resources to help protect students and teachers while at school. President Trump called for the elimination of HIV in America, and in 2018 I created an initiative to help prevent infections in communities suffering from substance abuse by bolstering Centers for Disease Control and Prevention programs.

Perhaps most notably, since President Trump’s inauguration the Senate has confirmed Neil Gorsuch and Brett Kavanaugh to the Supreme Court, along with a record number of brilliant lawyers to other federal courts. In fact, one in every six circuit court seats in the country is now filled with a judge nominated by President Trump and confirmed by the Republican-led Senate.

We also passed landmark opioids legislation, containing two of my proposals. First, my “CAREER Act,” encourages partnerships to help those in recovery maintain long-term sobriety through consistent employment and a stable living arrangement. My other provision, the “Protecting Moms and Infants Act,” continues our bipartisan efforts and implements treatment guidelines for babies born with neonatal abstinence syndrome.

One of the Kentuckians at the forefront of our ongoing fight against addiction accepted my invitation to attend the State of the Union this year. Lisa Minton, the executive director of the Chrysalis House in Lexington, is the leader of our Commonwealth’s oldest and largest licensed substance abuse treatment program for women. I was honored to visit the facility in 2017 and to help secure a $2.6 million grant from the U.S. Department of Health and Human Services, expanding their services for low-income, pregnant and postpartum women working to overcome substance abuse.

Now that we have heard the president’s agenda for this year, we must continue our work. As Senate Majority Leader, I’m ready to make another long list of accomplishments for 2019. Together, we can continue to bolster our national security, strengthen our economy and make life better for you and your family.

Home » Opinion » Working with President Trump to strengthen our union