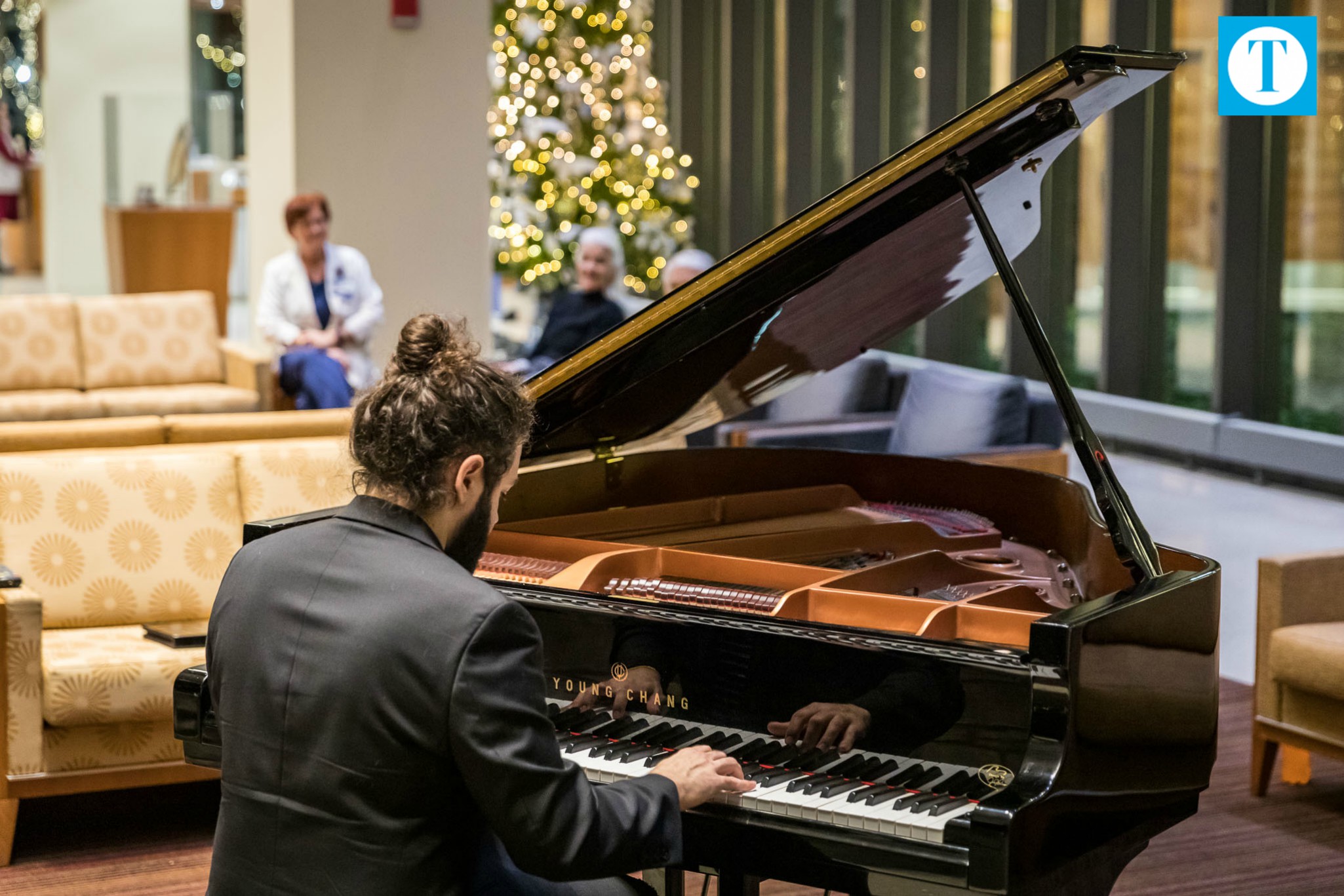 Collin MacQuarrie plays over the holidays for visitors, employees and patients at OHRH. | Photo by AP Imagery

Collin MacQuarrie’s piano music has been heard for over 25 years in this community. Quite an amazing feat, considering he is only 30 years old. His parents, Colby and Carol MacQuarrie gave him a small, wooden piano to begin and then lessons.

“My parents were so intentional,” MacQuarrie said, referring to the discipline and awareness needed to develop a natural talent.

MacQuarrie first took lessons from Diane Earle, a music professor at Kentucky Wesleyan College and then continued with Randy Buehler who was the music director at Owensboro Christian Church in the early 2000s. When he was 18, MacQuarrie dropped the lessons.

Although he credits his parents and instructors with the development of his talent, MacQuarrie recognizes that his talent is really a gift.

“It is a gifting of the Lord that just had to be awakened,” MacQuarrie said of the time he took off from pursuing his music.

In 2009, MacQuarrie became a Christian, and that is when he said his relationship with his music changed.

“I think I did enjoy it [before], but I didn’t know how much of my identity was involved,” MacQuarrie said.

When he was younger, he had inner motivation and beyond that, his audiences continued to compliment his playing, so he had a sense that he was gifted.

“Maybe because I was shy or unsure, I didn’t know what to do with it,” MacQuarrie said.

While a student at Kentucky Wesleyan College, MacQuarrie began working with the college worship team and became worship leader, something that inspired him to play in several worship bands in the community.

In 2012, MacQuarrie graduated from Wesleyan with a Bachelor of Arts in Music and Industry and a minor in Spanish. It is also there that he reconnected with Earle, still a professor of music at the college.

MacQuarrie returned full-time to work at his family businesses, Colby’s restaurant and Colby’s Deli. In 2013, he became co-manager of the deli. Throughout, he has continued playing because of the personal enjoyment and fulfillment he receives from his gift.

“It is most rewarding to see others enjoy it,” MacQuarrie said. “I provide it to others, but I enjoy it too and I want them to enjoy it as much as I do.”

MacQuarrie also entertains in local establishments and homes hosting dinner parties. He said he is busiest over the Christmas season and does not tire of playing Christmas music. In fact, he said that he could play every Christmas song once and still not play them all.

MacQuarrie also participates in Music on Call, a partnership with the Owensboro Symphony Orchestra (OSO) where musicians play at different locations throughout the community to bring music to others. MacQuarrie played piano music over several days during the holiday season, entertaining people as they walked through the lobby at Owensboro Health Regional Hospital.

He also plays with the 2nd Street Big Band, a 19-piece band that is sponsored by the OSO.

MacQuarrie enjoys the “gigs” he gets to play in the community and recognizes that Owensboro residents support local talent.

“If you do one gig and you do it well, people notice,” MacQuarrie said.

MacQuarrie is not sure where his musical future will lead, but he hopes to become more involved in leading worship music. He feels this would be the most complete manifestation for his talents, because he would be leading and teaching, something he also does on the side.

“If you do anything with music, it will benefit you,” MacQuarrie said of people keeping an open mind to different genres.

MacQuarrie compares this to the idea of food, saying that an open mind to music is the same as an open mind to trying different food and not “keeping the palate boxed in” — a perfect analogy for MacQuarrie’s combination of talents.