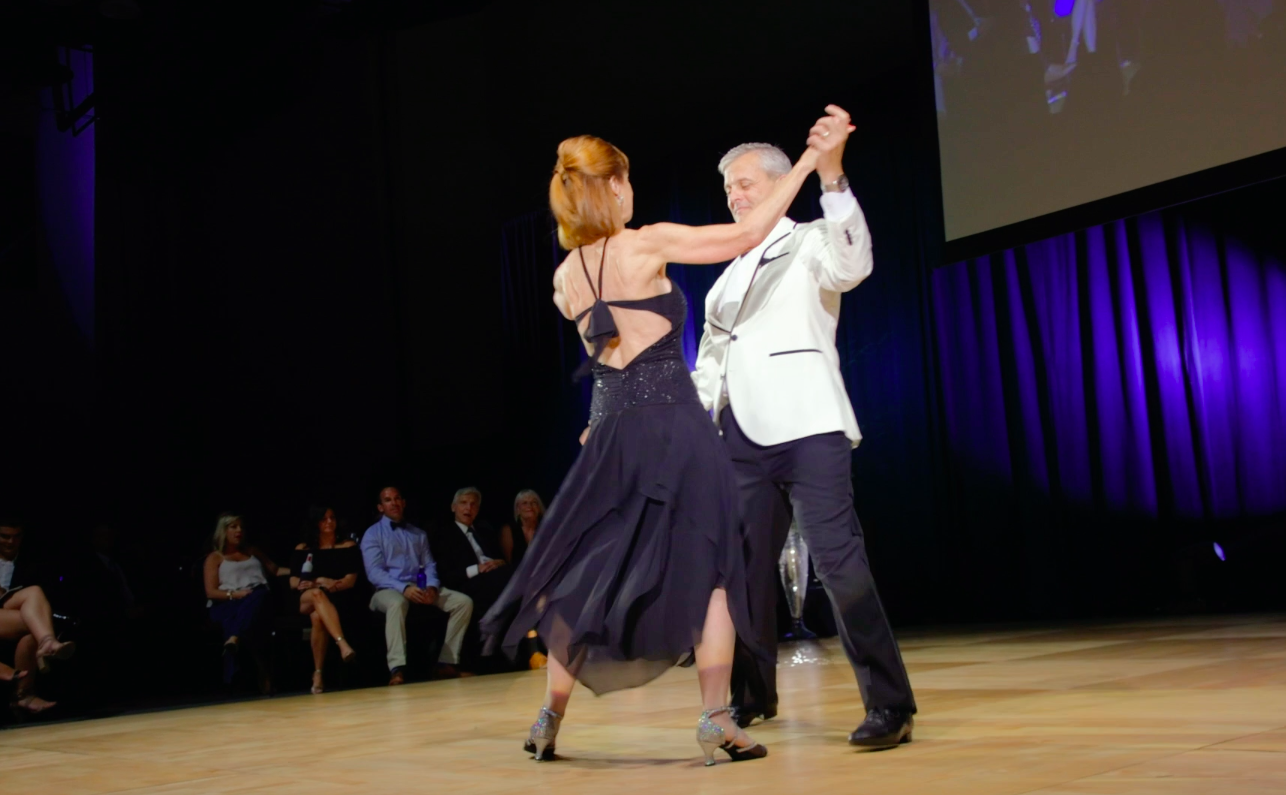 Pharmacist Carl Lewis and his coach/partner, Natalie Henning, a fitness professional, performed a soothing Foxtrot at the sixth Dancing with Our Stars event. | Video by Matthew Martin

[brid video=”278755″ player=”13623″ title=”Dancing with our Stars Owensboro Times”]Aaron Mason, emcee of the sixth “Dancing With Our Stars” fundraiser, opened Saturday’s event boldly dressed as a ringmaster and performed “Come Alive” from “The Greatest Showman” in front of a packed house of approximately 520 people.

The crowd came alive, cheering on the eight couples who competed, ultimately raising a record-breaking $155,767 to benefit the Boulware Mission.

After a cocktail hour and seated dinner, the competition began with Joy Anderson and Jimmy Henning dancing a traditional waltz to an untraditional tune, “It is You,” from the animated movie “Shrek.” The pair executed a flawless routine. In what would prove to be the first of several spontaneous moments of the evening, a spectator flung an entire centerpiece on to the dance floor in approval.

Afterward, Anderson, a community volunteer, joked, “ I attained my goal – to remain vertical for the whole two minutes.”

Claudia Wilson, one of the evening’s three judges, complimented the duo, saying the dance was just what a waltz should be. “He was the frame; you were the picture.”

The next pair, Brooklyn Maple and Mario Vizuet, kicked up the tempo a notch with a tango salsa that rapidly went from medium to bold. Vizuet, a Relationship Banker for Old National Bank, took off his shirt and proceeded to flip Maple, the Director of Marketing at Kentucky Legend, a number of times.

Angel Welsh, local radio personality and judge for the evening, teased that she thought “every husband in the room moved their chair a little closer to their wife.” While Wade Jenkins, Market President for Old National Bank, as well the evening’s third judge, provided comic relief by seemingly consulting Google for relevant terminology throughout the evening.

Chip Pride, a Commercial Loan Officer at Independence Bank, and Kaitlin Nonweiler, took to the stage to cha-cha to the tune of Camila Cabello’s “Havana.” Pride, who sported a white blazer and fedora he jauntily cast aside early in the routine, was clearly a crowd favorite. However, he gave all the credit to Nonweiler, who has served as a celebrity dancer for the competition for the last three years.

Wealth advisor Bo Ivey and his coach, Jessica Hodges, a local personal trainer and fitness instructor, danced a Charleston Swing complete with jazz hands. Ivey wowed the judges and crowd with the furiously fast movement of his feet, which emcee Aaron Mason observed to be “on fire.”

Donna Mason was honored during intermission for her eight years of service to Boulware. She said that, though she worked 30 years as a nurse, the eight years she spent at the mission changed her life more than anything.

Welsh said the duo’s routine “took her on a journey from middle to school to clubs in college.” Jenkins dubbed the hair slinging Jarboe a “blonde flamingo.”

Pharmacist Carl Lewis and his coach/partner, Natalie Henning, a fitness professional, performed a soothing Foxtrot. The pair’s seemingly effortless execution of the routine prompted judge Claudia Wilson to remind the crowd that “the foxtrot may look easy, but it’s not.” Lewis, who said he was extremely moved by the work Boulware does and that he was “blessed to be a part of this, and relieved to get to this point.”

The next to last act of the evening had a uniquely theatrical element to it. Philip Page and Heather Montgomery, a Branch Manager for Liberty Financial, dressed as a toymaker and wind-up doll. The pair danced a swing routine to what sounded like a gravely old phonograph.  Afterward, Montgomery said she “won the lottery” by having Page as her partner.

Finally, Kristin Niehaus, a Senior Vice President and Sales and Service Manager at First Security Bank, and Paul Underhill, a courier with FedEx, performed to Maroon 5’s “Sugar.” The duo, clad in sparkly blue, had a vocal cheering section complete with masks of Krista’s face on sticks.

Shortly before 10 p.m., the table donations were counted and the prizes were announced.  Second runners up were Carl Lewis and Natalie Henning, first runners up were Chip Pride and Kaitlin Nonweiler and Heather Montgomery and Philp Page were named the 2018 champions.

Home » Entertainment » Events » Dancing for a Cause