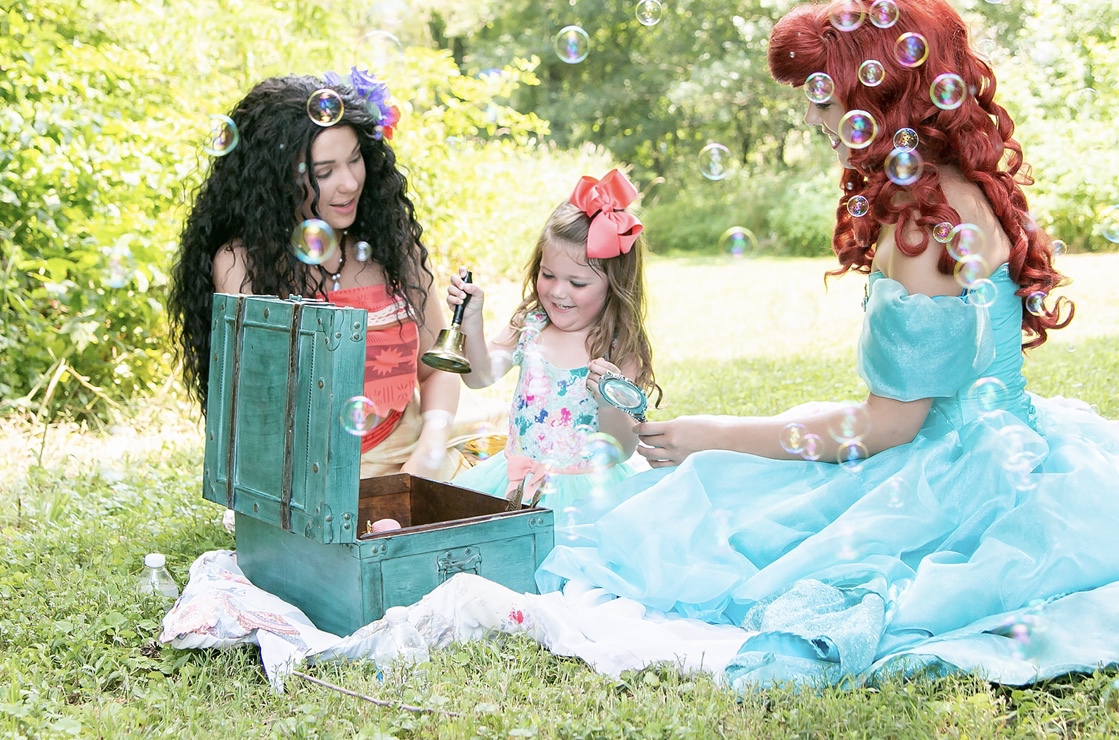 Three years ago, Jessica Barr wanted to surprise her daughters for their shared birthday party. Both girls were young enough to believe in magic, and fairies, and all the mysteriousness that makes a trip to Disney World so inspiring for kids. Barr wanted to create a similar magical experience, but in Owensboro, and on quicker notice than planning a trip to Disney.

Barr searched for local character actresses who could portray princesses to surprise her daughters, but she came up short.

After days of searching, Barr found a couple of females in Owensboro who not only physically resembled the roles of Frozen’s Anna and Elsa but were willing to execute the mannerisms, attitudes and voices of those roles believably. Barr bought costumes and trained the girls the best she knew how.

In the end, the party was a major success. Barr’s daughters believed real-life princesses had come to see them. It was all they could talk about.

Barr realized she had stumbled upon a bigger idea.

“The rest is history,” she says.

Barr realized Owensboro had an open market for an entertainment company providing magic without the extreme price tag. After extensive research, Barr started her own entertainment business and—between her shifts working as a full-time CNA in Owensboro Health’s Critical Care Unit—she began building a cast. Her husband helped build props and accessories. The beginning, she says, was a learning experience.

“It took time being able to add characters based on requests and popularity,” said Barr, who’s since expanded her audience by adding superheroes. “I had a limited budget for everything because I didn’t know whether or not this would work.”

Since opening Fairy Dust Entertainment in 2015, Barr’s business has thrived. The company’s Facebook page has a perfect 5-star rating from 64 reviews. FDE is often hired by local companies such as Chick-fil-A, Trunnell’s Farms and Daviess County Public Library to entertain children at their biggest events.

“I can only describe it as organized mayhem,” said Barr.

Barr’s focus is authenticity and, in her eyes, the details matter. The price for authenticity isn’t cheap. The average princess costume is usually custom-made and costs Barr $400-$600 out of pocket. One of the gowns worn in rotation cost Barr nearly $900.

“There aren’t many ways to explain how you feel after buying a new, gorgeous gown, only to see it come back from an event with face paint or candy on it,” Barr said.

Because of Disney’s and Marvel Studios’ strict trademark and copyright policies, Barr’s characters must be at least 15 percent different from the originals. To do this, Barr buys costumes and wigs from professional designers unaffiliated with trademarks. She also created her own character names to replace the originals. “Tower Princess” stands in for “Rapunzel” and “Superguy” replaces Superman, and so forth. Barr reminds parents not to use the Disney-affiliated names on social media posts but, so far, she hasn’t had liability issues.

Customers can rent characters for parties and events, choosing from a long lineup of princesses, fairies, and female and male superheroes.

Barr’s current projects include a PJ Princess Party as well as a Princess and Me photo shoot on October 21.

“As hokey as it may sound, every event and party is another ‘best moment,’” says Barr. “My goal with this business is to remind kids to be kids, and that magic does exist.”