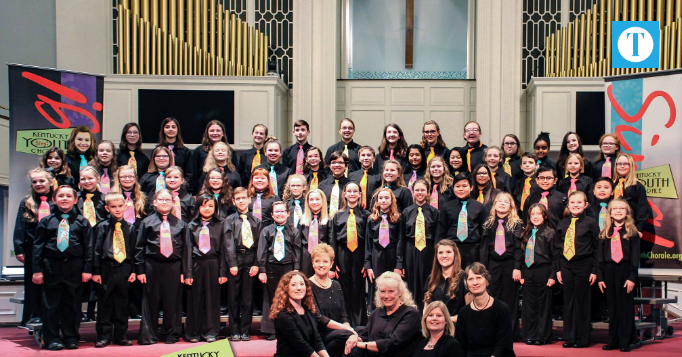 Twenty youth singers from Owensboro will travel to England this month to participate in the International Children’s Choral Festival.

On July 20, members of the Kentucky Youth Chorale will fulfill a project two years in the making and travel across the pond to sing in Canterbury Cathedral. Renowned conductor David Flood of the Canterbury Boy’s Choir, will be leading the festival.

“Canterbury Cathedral was built in 600 A.D.” said KYC Director Julie White. “It’s an enormous structure that has unparalleled acoustics.” With the loss of Notre-Dame, it’s now the most sought after cathedral to perform in, she said. “It’s amazing that our students from Owensboro are getting to perform at Canterbury.”

While there, the students – ages 10 to 17 – will sing in a mass choir with other children from across the world.

“When I hear the students singing in Canterbury cathedral, there won’t be a dry eye there,” White said. “Children singing sound like angels anyway, but you put them in a cathedral like that and you feel like you’ve risen to a plateau higher than planet earth.”

The group has been in fundraising mode for two years to make the trip possible, and while the music is the primary focus, White is excited for students to experience travel.

“It’s so important that our students here in western Kentucky get a broader view of the world,” she said. “Many of them have never been on an airplane. They’ll get to learn the history of the place and do some sight seeing.”

After their performance at Canterbury, the group will move toward London to perform at Southwark Cathedral – where William Shakespere attended church, just walking distance from the Globe Theatre. They’ll also get to see the Tower of London, the London Bridge, the Queen’s Jewels and a production of Wicked.

“It’s a big experience,” said White. “We’ve all worked hard to help them financially get there.”

They’ve also worked hard on their music. White said the 20 selected singers have been rehearsing the music for a year to sing it’s complicated pieces by memory.

“It’s challenging,” she said. “It’s made us sharpen our skills so we can keep our heads up as we perform.”

The group will host a special send-off concert at 2 p.m. Sunday at First Presbyterian Church.

“I would love for the public to come and hear us,” she said. “It’s exceptional. It’s been very challenging and they’ve done it with great enthusiasm.”

This will be White’s third time taking the choir to the festival, and this year is special because conductor David Flood will be retiring at the end of the year.

“I’m really not sure what will happen to the festival after that,” she said.

For those interested in being part of the KYC, auditions start in August.