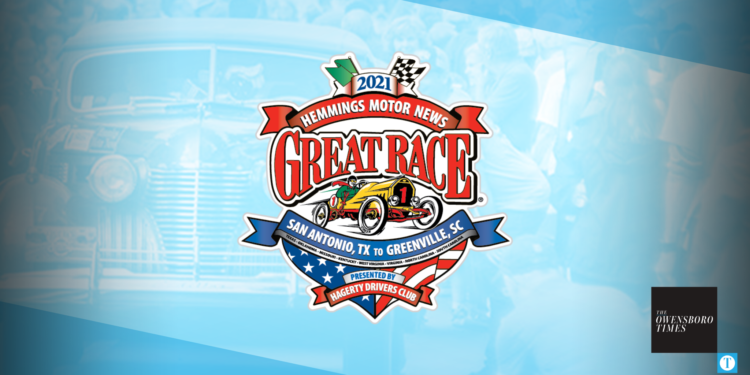 More than 100 unique vehicles will make their way through downtown Owensboro this week as part of a cross-country event that spans 2,300 miles in nine days. The Great Race, in its 38th year of existence, will make a pit stop in the area at 5 p.m. Wednesday.

Race director Jeff Stumb said people can line up along Veteran’s Boulevard to watch the cars drive through one by one. The event runs from San Antonio to Greenville, South Carolina.

Stumb said the cross-country trek wasn’t a race of speed, but a race based on “endurance and accuracy.”

The Great Race officially took off in 1983 as a way to get older cars out of museums and back on the road. The first event started in southern California and ended at the Indy 500 in Indianapolis.

Each car meets checkpoints along the way, with the goal of arriving at each destination in one-minute intervals. That way, Stumb said, viewers get to see a different car cross the checkpoint every minute.

The oldest car participating in this year’s Great Race is a 1916 Hudson, Stumb said. Incidentally, that 103-year-old car won the last race.

“You’re going to see a lot of amazing cars, a lot of great people,” he said. “There’s 500 people in our total entourage. We’ll have about 120 cars, with a driver and navigator in each car. It takes a volunteer staff of over 40 people to put this on.”

“It takes a lot of people to make it happen,” he added.

This leg of the race is sponsored by Don Moore Automotive, The Bluegrass Music Hall of Fame  & Museum, the City of Owensboro, Ole South Bar-B-Q and Daviess County Fiscal Court. The Sunset Cruisers will be helping with the event as well.