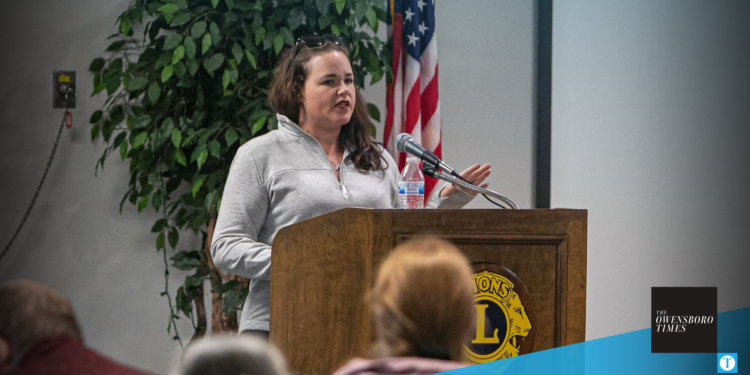 A Faith, Liberty and Freedom Rally was held Saturday at the Daviess County Fairgrounds. Local and national speakers addressed several topics, primarily including educating attendees on a therapeutic and naturopathic approach to COVID-19, as well as the importance of participating in elections to create political change.

Owensboro resident Darrin Tapp organized the event, which ran from 12-8 p.m. Roughly 100 people were there at 1 p.m., and attendance held fairly steady throughout the afternoon as attendees filtered in and out.

Tapp said part of his goal was informing people on the importance of “trying to get the power away from the federal government back to the states. Federal government has just gotten completely out of control with their authoritarian mandates and all this other stuff that is going on.”

However, the initial idea for the event was to provide “uncensored” medical information.

“I started out with a medical component because I think all of us have a family member or a friend that has passed away due to [the coronavirus],” he said.

Tapp said he has a friend who is a doctor and professor that has been working on therapeutic cures for this disease. Tapp started talking with the friend along with Jesica Mills, who is the pharmacist and owner of Owensboro Family Pharmacy and a naturopath who works at Owensboro Family Wellness.

“You’ll find a lot of the independent doctors that aren’t plugged into a hospital system are attacking this completely differently than the hospital system,” Tapp said. “… I’m no doctor, no scientist, but I know people who are. I know that people that are treating this early with therapeutics aren’t going to the hospital, they’re not getting put on a ventilator.”

Mills was one of many guest speakers at the event. She said she wanted to talk about what people can do besides just vaccinations, hand washing, masks and similar preventative measures that public health boards have been promoting.

Mills said her goal was to educate and empower people, not to say what is right or wrong.

“It’s not my job to be someone that forces compliance or mandates anything,” she said. “What we really like to do and why our practice is just a little bit different is we really just want to educate people and empower them to be able to make a choice that works the best for them.”

Mills said when their patients do test positive, the practice checks to see if they are at higher risk due to other health conditions such diabetes, high blood pressure, obesity.

“Those are the things that across the globe we’re seeing as risk factors for developing severe conditions and severe disease,” Mills said. “So we’ve been working on really studying the actual virus and how it works in pathophysiology. … We’re doing some things that other countries are using that they’re seeing success with, as well as the pathophysiology and making that available to the general public.”

She said much of that is about being able to help people learn how to balance the immune system “because you don’t want to stimulate it and get an overactive response” because that’s what’s causing symptoms such as acute respiratory distress syndrome (ARDS).

Mills said their practice has had more than 500 people that have done telehealth that were COVID-positive or were interested in their protocol for prevention.

“Of our 500 people, no one has actually been admitted to the ICU and been placed on a ventilator and none of our patients have died,” she said. “Our oldest has been 98, our sickest had six different comorbidities. So we’ve seen a lot of really great success, and it’s not things that are super hard. … We’ve been educating people on what they can do, what lifestyle choices they can make, that kind of stuff.”

Tapp said as he began piecing together the event, more people reached out to participate, so the range of topics also grew.

“This thing really manifested itself,” he said. “These people have just come on board with very little effort on my part. I’ve just kind of been the conduit to pull it all together.”

Calloway — whose district covers Breckinridge, Hancock, and part of Hardin counties — said he attended the event to talk about the freedoms “that are given to us from our Constitution and by God, and what people can do personally to try to ensure that those things are preserved for the next generation coming.”

Calloway said the primary reason he ran for office was to have a “futuristic” mindset represented in Frankfort and to protect the next generation. He said the pandemic has opened people’s eyes to issues they may not have seen before.

“We have some pieces of our educational system that were broken, but it was kind of revealed through COVID,” he said. “A lot of parents are trying to figure out what to do, what if this thing prolongs and what options do we have to be able to make sure that our kids can continue with a good education, all of those types of things.”

Calloway also said it’s important for elected officials to truly be the public servants they are supposed to be.

“That’s what this role has to be about all the way to the federal level,” he said. “I think that’s a lot of the disgust that people have right now is because they feel like their voice is not what’s heard, that it’s the will of politicians and the elite. Our constitution set this up so that the people rule. I think we need some fear back in government again.”

He said for that to happen, people need to vote and be involved in local government.

“My fear is that there’s a lot of people that have lost trust and faith in the system,” he said. “We have to understand that the only way we fix the system is to engage in it.”