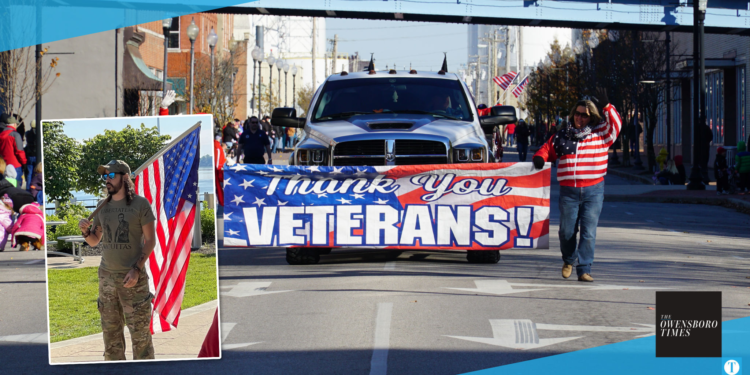 U.S. Army Veteran Derek Van Tuyl will be the Grand Marshall for this year’s Veterans Parade, scheduled for Nov. 6.

As a tribute to several of his fallen comrades and as a way of healing, Van Tuyl started a memorial walk in 2008. That first year he walked 12 miles from Whitesville to Owensboro while carrying an American Flag along Route 54. He has continued this walk each year around Memorial Day.

For this year’s walk, dozens of people joined him along the journey. Van Tuyl also placed nearly 100 flags in his yard to honor those who have died while in service. Those that walked the route this year included members of the Kentucky National Guard Owensboro Engineer Battalion who recently returned from their deployment to Iraq.

Van Tuyl is a native of New York and has resided in Owensboro for almost 10 years.

This year’s parade will be on Nov. 6 beginning at 2 p.m. The route begins on 2nd Street and continues along Veterans Boulevard.

The event will be streamed via Facebook Live on the Owensboro Daviess County Veterans Organization Facebook Page. US Air Force Veteran (RET) Terry Stinson and US Marine Veteran (RET) Jack Groshens will provide commentary about each entry in the parade.

Any organization or business would like to participate can contact Parade Chair Jessie Hettinger at 270-929-2077 or go online at kentuckyremembers.org to fill out an entry form.