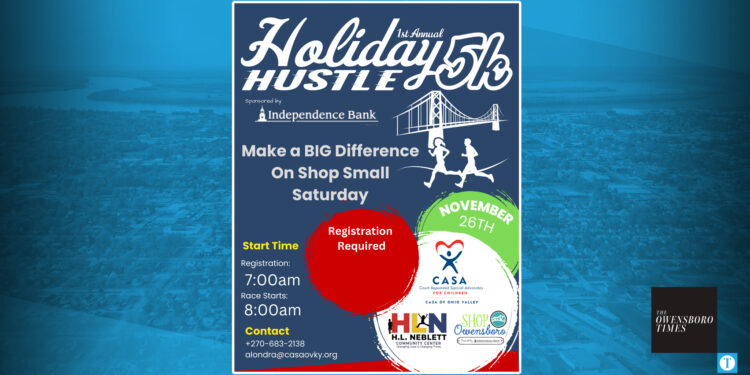 CASA of Ohio Valley and the H.L. Neblett Community Center are partnering for the Holiday Hustle 5k on November 26, with a goal of bringing the community together and raising awareness for their respective organizations.

However, both thought the community may not know enough about the services the organizations offer.

“Our biggest thing is just making sure we raise awareness about our programs’ locations and what we do because I think it’s important that not just the city of Owensboro knows who we are and what we do, but the county because we represent kids from all over the county,” Neblett Center Executive Director Keith Cottoner said.

When planning the 5k route, officials tried to build a map that takes runners to each of the organization’s buildings.

Starting at Independence Bank, participants will run down Frederica Street and pass by CASA’s office at 608 Frederica Street, where there will be cheers and a water station.

Then runners will hook a left turn and head down to the H.L. Neblett Center at 801 West 5th Street where there will be another crowd of cheers and a water station before they head back to Independence Bank on Walnut Avenue.

Evans-Smith said that the route is very walkable from one neighborhood to another.

To register for the 5k, head to the event website. Registrations are accepted through race day. They are also looking for volunteers which can be done by calling either organization.