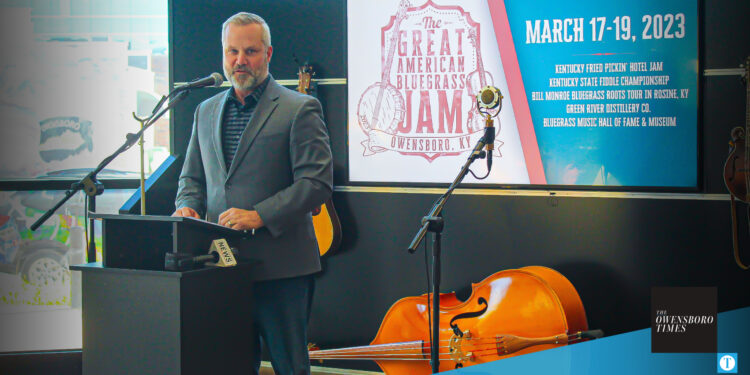 The Great American Bluegrass Jam is coming to downtown Owensboro in March 2023. Organizers are hoping to draw bluegrass enthusiasts and musicians for a weekend full of music, competition, and even a Bill Monroe Roots Tour.

The Bluegrass Jam is scheduled to take place March 16-19 and is being put on by the Bluegrass Music Hall of Fame & Museum.

Events include the Kentucky Fried Pickin’ Hotel Jam at the Holiday Inn Owensboro Riverfront; the Kentucky State Fiddle Championship along with The Earls of Leicester concert, both at the Hall of Fame; and trips to Green River Distilling and the Bill Monroe homeplace in Rosine.

“We have to create something unique and create an experience for bluegrass music that’s compelling for people to get in their car and drive here to Owensboro that weekend,” said Chris Joslin, Hall of Fame Executive Director.

Joslin said the Kentucky Fried Pickin’ Hotel Jam has attracted people from nearly 20 states over the past two years.

The Kentucky State Fiddle Championship is also known to bring fiddlers from beyond the Commonwealth to battle for the title. Two-time winner Natalie Padilla will be traveling from Montana to defend her title in the contest.

Guests will also have the opportunity to purchase an excursion for the Bill Monroe Bluegrass Roots Tour with a shuttle service from the Holiday Inn. This tour starts with the Bill Monroe Homeplace in Rosine, where he lived until moving in with his beloved Uncle Pen, whose cabin will be the next stop. Other stops include the Bill Monroe gravesite, the Rosine barn for lunch and a little music, and the Bill Monroe Museum.

“No more will Owensboro and the surrounding area be viewed as a hidden treasure hoping to be discovered by curious leisure travelers. Those days are over. We’re a world-class destination. We’re the Bluegrass Music Capital of the World, and we’re living this out,” Joslin said.

Mark Calitri, President/CEO of Visit Owensboro, said their organization has been working to ensure they help bring world-class events like Great American Bluegrass Jam to Owensboro.

“So this is what we do; we create events like this in the Bluegrass Music Capital of the World. So, 2023 is going to be an exciting year so hang on,” Calitri said.

Excursions to the Green River Distilling Co. will also be scheduled with transportation from the Holiday Inn. Downtown businesses will also be spotlighted for guests with a full map and listings of ongoing events, live music, specials, and more.

More information can be found here.