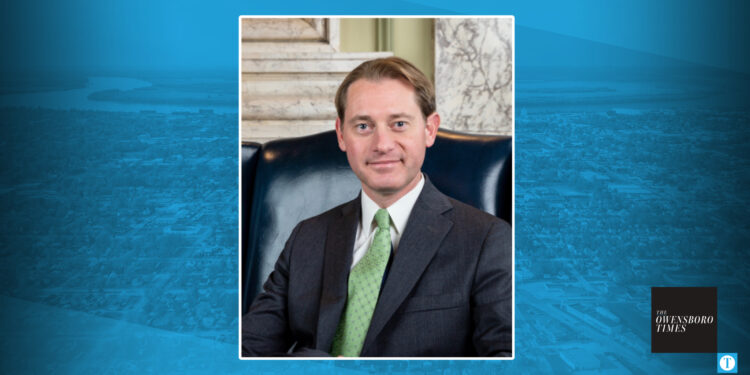 The program begins at 7:30 a.m. at the Owensboro Convention Center (501 West Second Street) and is sponsored by Kentucky Wesleyan College. Register to attend here or call the Chamber office at 270-926-1860.

Adams attended McCracken County public schools and was the first in his family to get a bachelor’s degree. After graduating from the University of Louisville, he attended Harvard Law School on low-income aid.

Returning to Kentucky, Adams served as Deputy General Counsel to Governor Ernie Fletcher before moving to Washington to accept an appointment as Counsel to the U.S. Deputy Attorney General in the second Bush Administration.

Inaugurated as Secretary of State on January 6, 2020, Michael first pushed his signature legislative issue, Kentucky’s first Photo ID to Vote law, through the General Assembly. He then pivoted to focusing on resolving issues with the primary and general elections that arose during the COVID-19 pandemic. In 2021, Adams presented state legislators with the most ambitious election reform plan since 1891, and the bill passed both chambers with near-unanimous support.