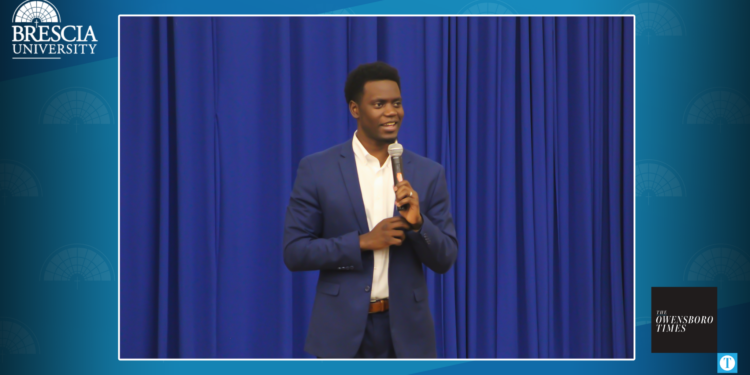 Signs carried messages such as “Love thy neighbor,” “hate doesn’t drive out hate, only love does,” and more.

In the ceremony following the march, BU President Father Larry Hostetter said the tradition of the march is increasingly important.

“I think the last few years have highlighted for us the importance of keeping this march alive. That as we come to recognize that in our nation and in fact in our community, we still have work to do. That the work that as we heard was done before Dr. King was brought to the national stage continues with all of us today even in our small community, and it’s so gratifying to see so many of you here this morning,” Hostetter said.

Mayor Tom Watson also spoke, noting the race relations in Owensboro when he was growing up.

He said that in 1968, he never really saw issues in Owensboro. It wasn’t until he took a baseball trip to Florida with a Black teammate that experienced separation based on skin color. His teammate had gotten sick and when they went to the doctor’s office he was met with two paths.

“Open the door and the first thing that hit us in the face was ‘Colored Lavatory’ and ‘White Lavatory,’” Watson recalled.

Still, he said upon returning to Owensboro he did not see such instances of division here. However, he said he still thinks the city is making progress toward diversity.

It still is going to take some more work to continue the progress to heal some of the “scars” as he calls them, and that’s the hope of the elected officials.

Singleton was the keynote speaker, sharing his experience of losing his mother in the 2015 Mother Emanuel Church shooting in Charleston, South Carolina. Nine Black people were killed by a white supremacist in that shooting.

Singleton touched on the importance of remembering MLK and his impact in our day-to-day life.

“I believe Dr. King wants us to keep pushing forward. Being selfless. Even if the problem is not about you, it’s not about people that look like you. We need allies that want to make sure everybody feels celebrated,” Singleton said.

Singleton noted that people do not choose their skin color, their first language, name, or where they are born among several other things. He said accepting everyone as they are is the key to unity.

“All these things we don’t choose but yet sometimes we judge people, we make fun of we assume things, about something we can’t choose,” he said. “And for me, unity is not that. Unity is saying hey, regardless of what somebody’s stance is, I believe they’ve got a story behind them just like I have a story behind mine.”