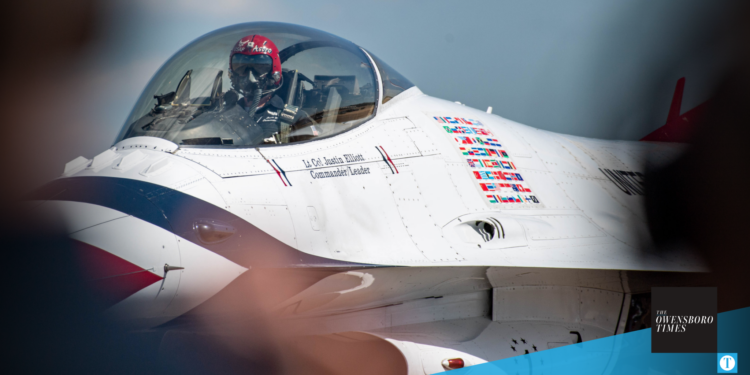 Fireworks, smoke displays, and non-stop maneuvers can be expected in the action-packed and fully revamped performance by the Air Force Thunderbirds during the Owensboro Air Show this September.

While the Air Show isn’t until the weekend of Sept. 15-17, two Thunderbirds team members were in Owensboro Thursday for a site visit as they began preparations.

“It’s an opportunity for us to come and get boots on the ground, and do some coordination for the details that are gonna be going into the air show,” said Major Jeffrey Simmer Downie, who flies Thunderbird 8. “As you can imagine, there’s tons of facets of information that go into producing and putting on an air show.”

The Thunderbirds haven’t flown in the Owensboro show since 2015, when they drew crowds of about 30,000 people according to local officials’ estimates.

When the Thunderbirds return with their iconic F-16 Fighting Falcons this September, viewers will be treated to a totally different experience. With their 2020 season canceled due to COVID, the Thunderbirds took the time off to overhaul their routine.

“The team was very uniquely positioned in 2020 with COVID to redesign the show completely,” Downie said. “You think about previous seasons where we go from having a show season that goes from March to November, and then we have to take November to March to train. There was never time to sit down and (redesign the show).”

Downie said the group worked with Disney executives and turned the Thunderbirds air show “into a fireworks display.”

“There’s a big-bang, high-energy opening. There’s different changes in tempo, there’s crescendos, and there’s false finales before that to build up to the actual finale,” Downie said. “It’s an incredible performance. We’ve changed the timing for maneuvers across show center. It’s less of doing one maneuver and then sitting and waiting for another jet to show up. It’s very in-your-face, action-packed, 20 seconds from smoke off to smoke on again.”

He added that the music “really plays to the emotional strings and just really makes you proud to be an American at the end of the day.”

The show only takes 36 minutes.

A full lineup has not yet been announced for the 2023 show. However, City of Owensboro Public Events Director Tim Ross previously said the Owensboro-Daviess County Regional Airport will be open for demonstrations and have a wide range of aircraft on display.

The City has also announced that the U.S. Navy Blue Angels will return to Owensboro for the 2024 Air Show.

“It is a real testament to the city of Owensboro to be able to attract two premiere U.S. military jet teams in back-to-back years with the Thunderbirds headlining our show in September 2023 and the Navy Blue Angels headlining again in September 2024,” Ross previously said. “The Air Show is a signature event for the city that attracts fans from all over the country and I am excited to continue that tradition in the coming years.”