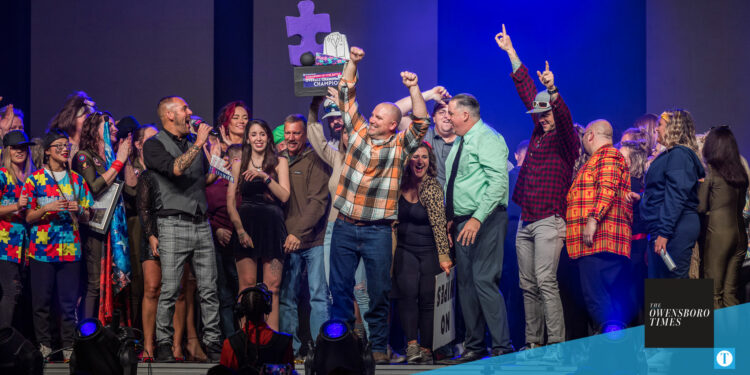 The sixth annual Owensboro Lip Sync Battle raised $208,510 for the nonprofit Saturday night, shattering the previous record amount by more than $72,000. Eleven teams performed in the show, with RWRA being voted Grand Champion.

The Lip Sync Battle is the primary fundraiser for Puzzle Pieces, with money coming in the form of sponsorships, team fundraising and ticket sales. This year’s event was sponsored by Vineyard Primary Care.

The show kicked off with special performances by emcees Chad Benefield and Angel Welsh, radio personalities from WBKR.

Competitors included the following (winners of each battle noted in bold):

Battle of the Sippers & Spitters
Swedish Match vs. Glenmore Distillery

In the team fundraising competition, Glenmore Distillery secured the most donations with more than $13,000 raised, earning them the Community Piece Award.

“Our 2023 event has been the most epic one yet,” said Puzzle Pieces Executive Director Amanda Owen. “We could not do what we do without the support from our sponsors, performers, and ticket buyers — they each play a part in supporting our clients.”

Puzzle Pieces serves more than 400 clients with disabilities. The nonprofit recently announced they will be expanding their Owen Autism Center to a second location, which serves as the region’s only targeted autism programming.