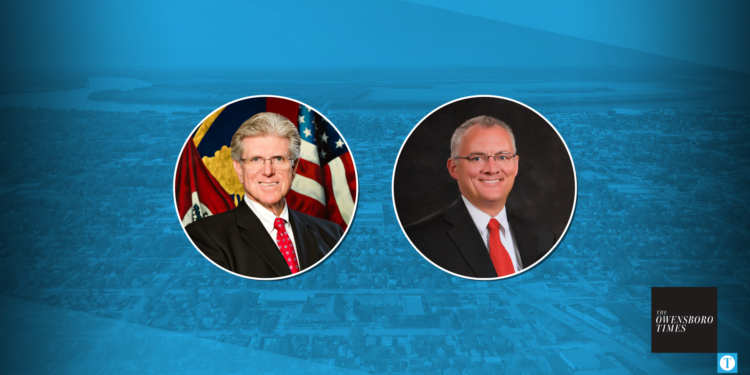 Owensboro Mayor Tom Watson and Daviess County Judge-Executive Charlie Castlen will give the annual “State of the Community” addresses Thursday during the Rooster Booster breakfast at the Owensboro Convention Center. The program will also include a special presentation with Matt Jones of Kentucky Sports Radio and Ashli Watts with Kentucky Chamber of Commerce.

The program begins at 7:30 a.m. at the Owensboro Convention Center (501 West Second Street) and is co-sponsored by the City of Owensboro and Daviess County Fiscal Court. Register to attend here or call the Chamber office at 270-926-1860.

Castlen is embarking upon his first term as Judge-Executive. He served for the past 12 years (three terms) as the Central Division County Commissioner and prior to that, served ten-years (five terms) over a 12 year period as an Owensboro City Commissioner, four of which were as Mayor Pro Tem. He is a graduate of Brescia University and was a self-employed CPA with more than 38 years of experience in banking, public accounting,

Watson will be giving a State of the City speech for the 11th time. He first served as mayor from 2005-2008. He was re-elected for a second term in 2016 and is now serving his third term.

Jones is the owner and founder of Kentucky Sports Radio (KSR), a website and radio show dedicated to sports coverage involving the University of Kentucky Wildcats. From September 2016 until July 2019, Jones also hosted Hey Kentucky!, a nightly sports and news recap program on WLEX-TV in Lexington. Jones also started a sports bar in Lexington that is modeled after the KSR brand called Kentucky Sports Bar & Grille, colloquially known as “KSBar”.

Watts was named the President and CEO for the Kentucky Chamber, the state’s largest business association, in November 2019. She joined the Kentucky Chamber of Commerce in November of 2012, and during her tenure as Senior Vice President of Public Affairs at the Chamber, she led efforts in passing significant pieces of legislation such as felony expungement in 2016, right to work legislation in 2017, workers’ compensation reform in 2018 and reinstating arbitration agreements in 2019. Prior to joining the Chamber, she worked at the Kentucky Bar Association and the Legislative Research Commission.

Home » Entertainment » Events » Watson, Castlen to give ‘State of the Community’ addresses Thursday