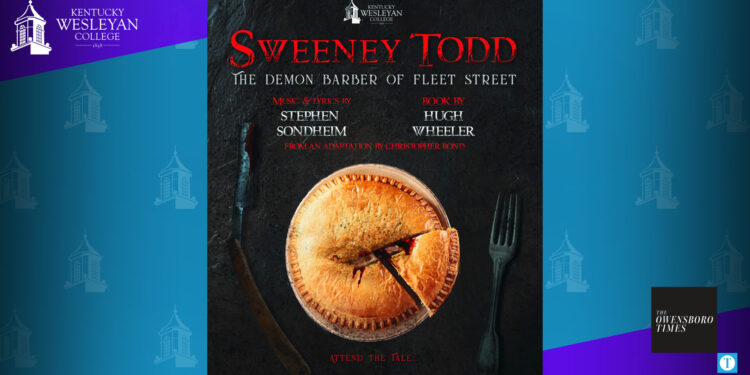 The theatre and music programs at Kentucky Wesleyan College are presenting Sweeney Todd, The Demon Barber of Fleet Street later this month.

A worldwide success, Sweeney Todd was awarded eight Tony Awards, including Best Musical. The KWC production is directed by Director of Theatre Nate Gross and Dennis Jewett, the College’s director of choral activities and vocal studies.

“I have wanted to direct Sweeney Todd for years,” Gross said. “Why? First, (composer Stephen) Sondheim. He’s the best. Such a tremendous loss recently, but what a life. That’s enough, but there is so much more. It is not your average musical. The protagonist is essentially a serial killer, but his origin story helps the audience sympathize with him. The music is difficult, but I have been so impressed with how our actors have risen to the occasion. Dennis Jewett has done a brilliant job as music director.”

According to the KWC play description, Sweeny Todd is a “tasty, thrilling, theatrical treat has simultaneously shocked, awed and delighted audiences across the world. An infamous tale, Sweeney Todd, an unjustly exiled barber, returns to nineteenth century London, seeking vengeance against the lecherous judge who framed him and ravaged his young wife. The road to revenge leads Todd to Mrs. Lovett, a resourceful proprietress of a failing pie shop, above which, he opens a new barber practice. Mrs. Lovett’s luck sharply shifts when Todd’s thirst for blood inspires the integration of an ingredient into her meat pies that has the people of London lining up… and the carnage has only just begun!”