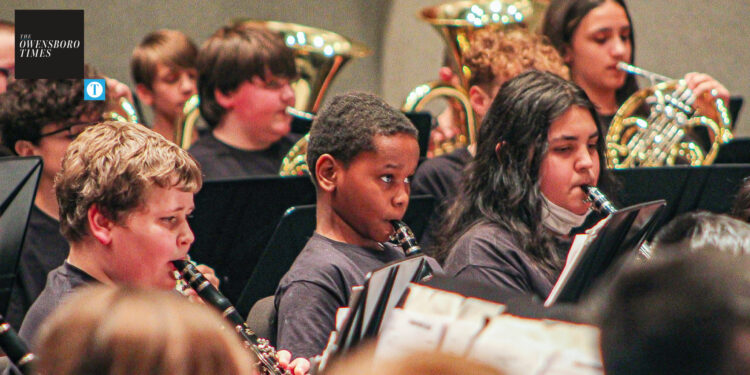 Owensboro Public Schools district officials on Thursday noted the success and talent displayed this week during the OPS Fine Arts Festival. While the arts festivities are over for the week, they pick back up on Tuesday and Wednesday night with theatre and dance, respectively.

Board Chair Melissa Decker said that the first three nights — which featured band, choir and orchestra respectively — reaffirm the talent that the schools possess in their fine arts departments.

“We all worried during quarantine that our students were slipping behind in every way academically, athletically, in the arts. Listening to these kids play and sing this week, I really feel like they took a big step forward this year,” Decker said.

This is the 23rd Annual Fine Arts Festival for the school district, and the theme this year is centered around the many cultures Owensboro has to offer.

OPS will also fill the RiverPark Center’s lobby with visual art like sketches, paintings, and sculptures throughout the performances next week.

To close the Festival, they will host a variety concert called Prism — which is closed to the public. There they will showcase samplings of the previous acts to about 3,000 OPS students.

In other business during Thursday’s school board meeting, OPS Superintendent Dr. Matthew Constant said the school system is close to announcing the graduation date for the seniors.

Chris Bozarth, Director of Facilities, Maintenance, and Technology, said that they are nearing the start of the Sutton Elementary School project, and that work at Cravens Elementary School has progressed well and is nearing milestones within the project.

“We are starting a portion of the front office (Friday) and if everything goes as planned, the new classrooms in the rear of the property will be able to be occupied,” Bozarth said. “The gym will not be ready until summer, but the classrooms, computer room and the bathroom we hope to be occupying those soon.”