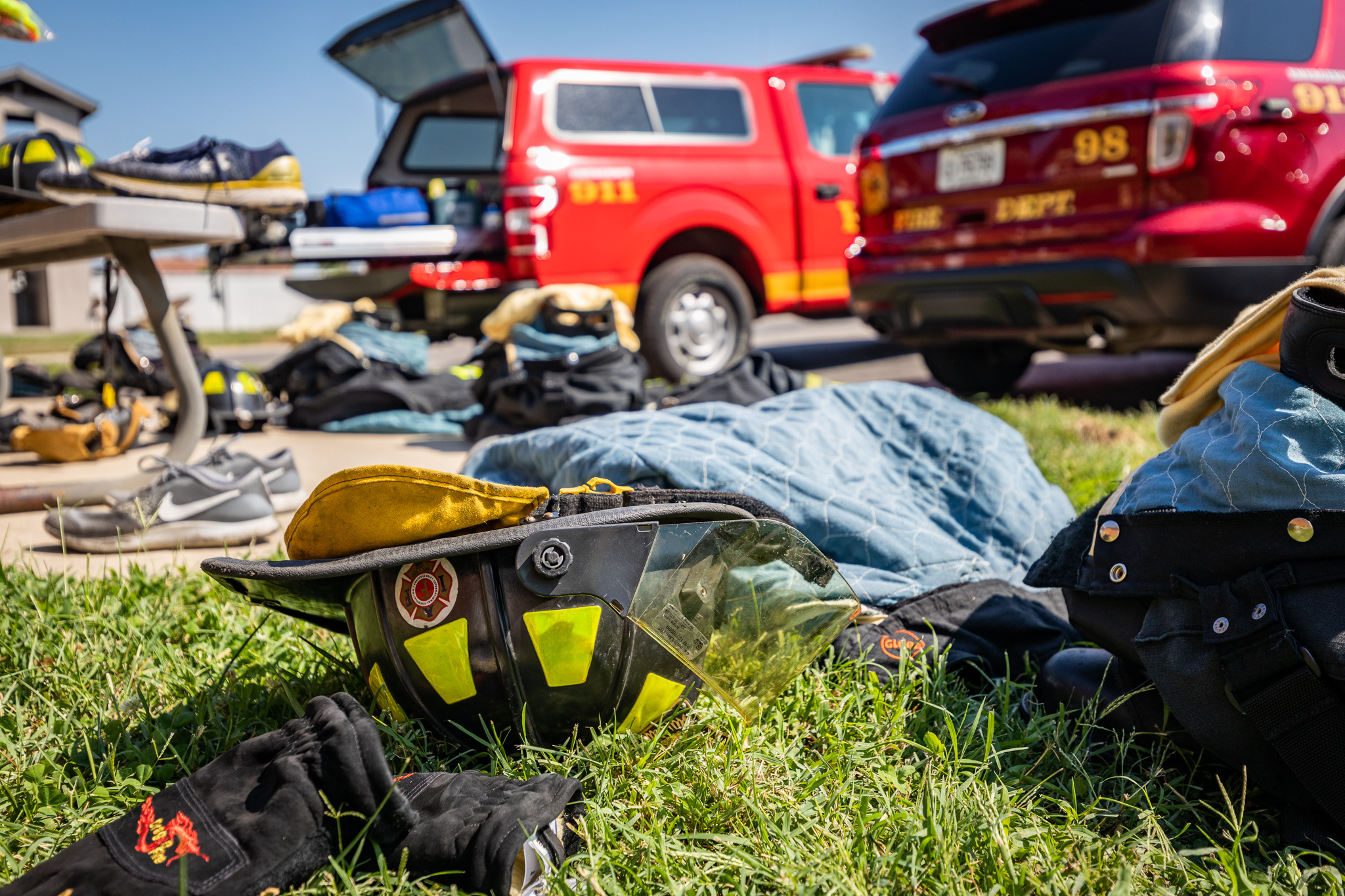 Battalion Chief Colter Tate said this particular drill is all about the repetition and committing the steps of actually putting on gear to muscle memory.

Each step of dressing out is addressed in training — from how to swing the jacket around, to how to step into the boots to how to quickly zip the zipper.

According to Tate, the standard time for dressing out is 1 minute and 30 seconds, but OFD wants 60 seconds.

“The goal is to make purposeful movement,” Tate said. “If you’re not, you’re going to waste energy you will need later.”

Tate has been a firefighter for 19 years, the last two years with OFD. He is in charge of all new recruit training, EMS and safety for the department. Tate says these six recruits will complete 12 weeks of training — 10 weeks with him at the Walter Freeman Fire Department Training Center on Daviess Street and two weeks at the National Responder Preparedness Center in Greenville, Ky.

Tate says 400 training hours are required to become a career firefighter. OFD recruits will graduate with 454 hours of credible training.

But being selected as an OFD recruit is a rigorous process. Applicants must pass a candidate physical ability test before sitting for a written test. They then go through multiple interview processes before being chosen by the OFD fire chief. They will also be screened with a background check, psychiatric evaluation, polygraph, medical physical and social media check.

This application season, 40 hopefuls applied, but only 20 were asked to take the written test.

But all of that is worth it for recruits like 23-year-old Dustin Vincent and 21-year-old Zachary Johnson.

“This is the only thing I can see myself doing,” Vincent said.

“I saw Owensboro grow into a fire department I wanted to be a part of,” said Napier, who is currently commuting to Owensboro from Bowling Green.

Joseph Dick, 28, is commuting from Evansville for his new position with OFD, a job he has been working toward for seven years.

Andrew Shively, 28, who has been training for this program for the last year, said he joined to make a difference in the community.

“I want to work for something bigger than myself,” Shively said.

Recruit Louren Agrinsoni is making Owensboro history with her acceptance into the Fire Academy. She is the second female firefighter to train for OFD. But Agrinsoni, 26, said that didn’t factor into her decision to join.

“When I came into this, I didn’t know there was only one female,” Agrinsoni said. “It wasn’t even a thought to me.”

In October 2016, Shannon Grayson became the first female firefighter in the 150-year history of the Owensboro Fire Department. At that time, women had previously applied to the department, but Grayson was only one of two women to pass the required tests. Now Agrinsoni is the second.

According to Battalion Chief Tate, the department is excited about any qualified recruit.

“Firefighters are firefighters,” Tate said. “If you can perform the professional qualities, nothing else matters. Gender doesn’t matter.”