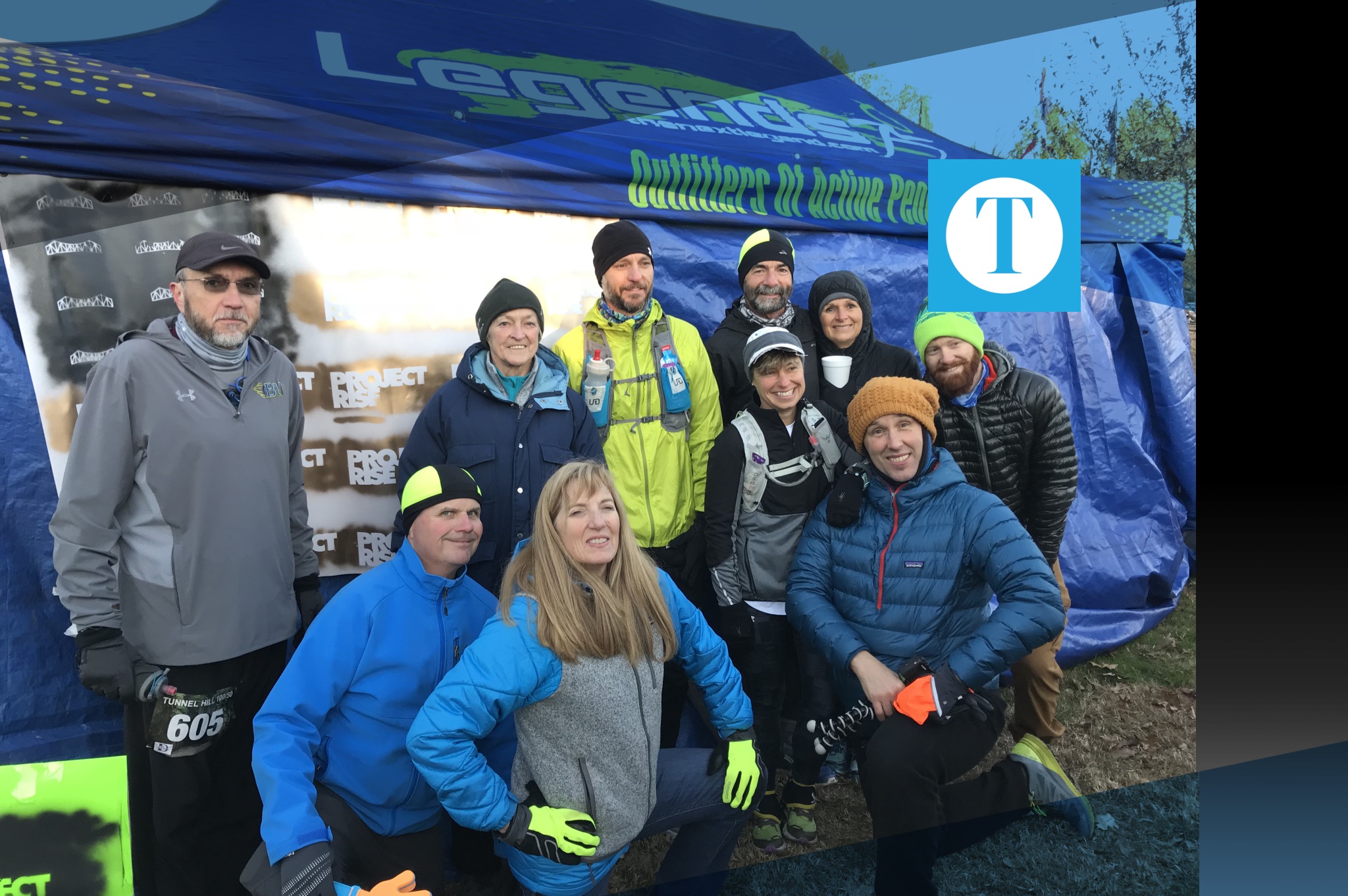 The Owensboro runners and their pit crew. | Photo submitted to Owensboro Times

This past Friday, Dylan Hammons, a local running enthusiast and motivational coach to several running groups, packed up and headed to Vienna, Ill. Hammons went ahead of the Owensboro ultra-distance runners and their families that would arrive for the Tunnel Hill 50 and 100-mile races to help them with anything needed during the run – changing socks, shoes, clothing, giving them food and drink. Hammons set up a tent to use as home base for the crew that would be arriving for the runners’ support.

Suzanne Anderson, one of the crew members, whose husband Lee completed the 100 miler, said the best story is of the people who gave up their weekend — and any sleep — to help crew the runners.

“I heard Lee say every time he came to home base he felt like he was in a NASCAR pit stop,” Suzanne said. “There were people changing his shoes, gloves, hat, lights, feeding him and getting him anything he needed.”

Tunnel Hill is described by trailrunner.com as an “incredibly fast course consisting of an old railroad bed covered with finely crushed limestone on the Tunnel Hill State Trail in southern Illinois” with a “gentle 2% grade” for the course, but “the scenery is anything but flat.”

And that does not speak to the weekend’s weather.

“It was a beautiful weekend but very cold,” Hammons said. “Temps were in the 20s at night, but it was amazing to see so many people battle the ultra distance.”

For support, Hoagland’s wife, Lori, his mom Darlene, and Hillary Harvey helped crew him. Matt Harvey paced Hoagland on the run for the last 30 miles.

“We all worked as a team to care for all four of the Owensboro runners,” Hammons said.

Lee set the goal of completing this 100 miler in less than 24 hours.

“I just turned 60,” Lee said, adding that he doesn’t know how many more years he has to do these.

Lee began his training around six months ago and tried to duplicate the distance as much as he could. He would run 15 miles one day, 20 the next and then 30 on the third day.

“I was trying to recreate how I would feel. Thirty miles seems to be my sweet spot,” Lee said.

“I needed to train where I was running at night — when it was dark and I was tired — so I could duplicate the conditions, and it wouldn’t come as such a shock,” Lee said.

Lee ran 400 miles in Sept. to “trash” his legs completely so they could rebuild, he said. And it seemed to work.

During the first loop, which is 26 miles, Lee ran 10-minute miles to build up minutes to use later, knowing he wouldn’t keep that pace for the entire race.

He also said this is the first ultra he has completed that he did not have downtime.

“In the past, I’ve stopped and had downtime — even slept for two hours,” Lee said. “This time, I only took five minute breaks. Dylan would time me and spur me on.”

The cold weather conditions caused Lee’s hands to be cold for the race, even with two pairs of gloves and hand warmers.

“Running gear has come a long way,” Lee said. He wore two shirts and a top over that, along with a pair of tights and shorts over those. Only his hands were affected, he said.

After arriving home from the race on Sunday afternoon, Lee said he hurt from the “tip of my toes to the top of my head — muscles, joints.” But he said he has no permanent damage.

And Lee is already thinking ahead. He said that after a race, he immediately says “No, I don’t ever want to feel this way again,” but that in a couple of weeks, things change. He is already thinking about the next 100 miler, the Western States 100, which is “like the Boston Marathon” for ultra distance runners.

“By finishing this race, I qualify for the lottery for the Western States 100,” Lee said. “And if by some miracle…” Lee trailed off.