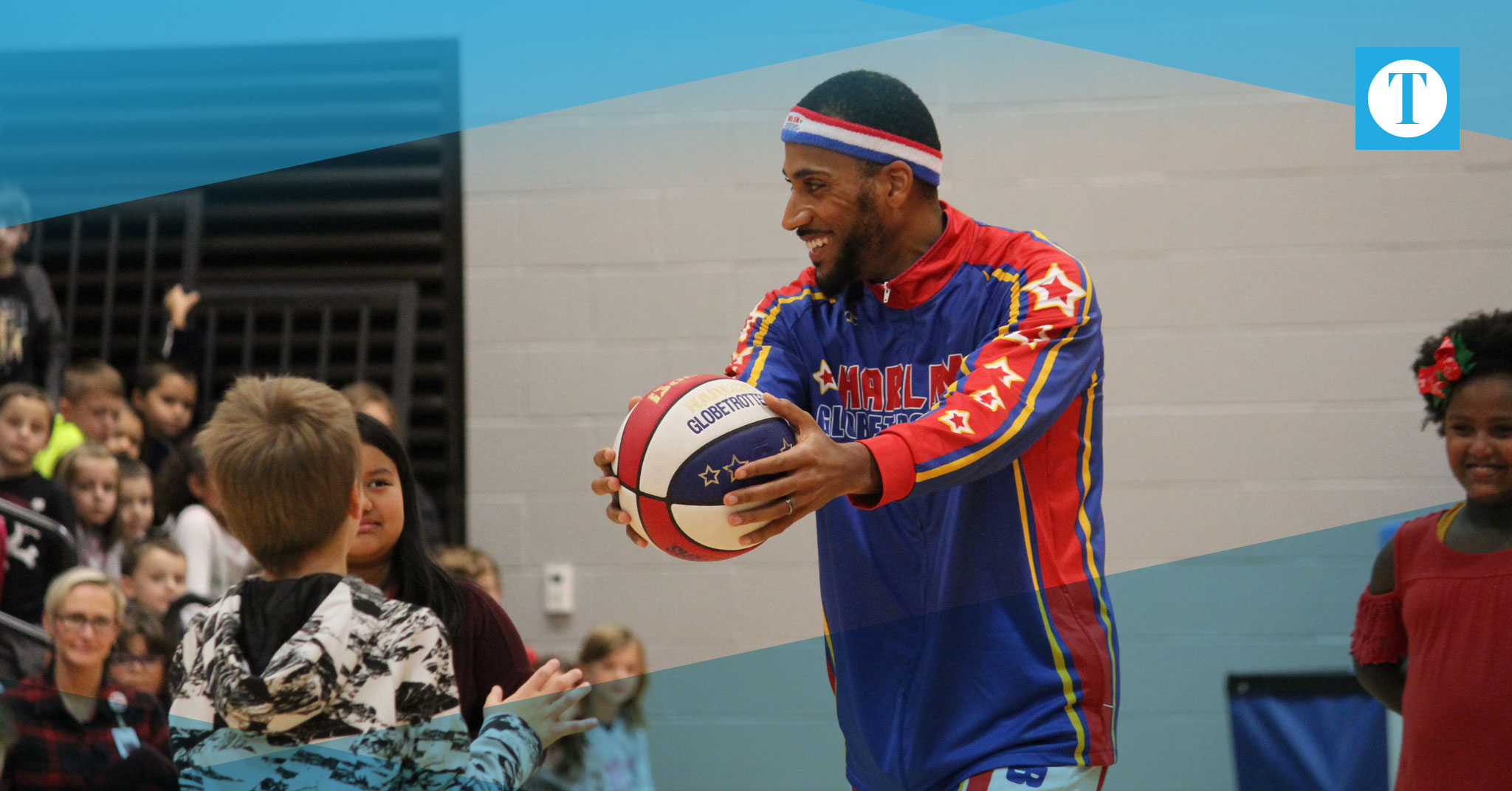 Julian “Zeus” McClurkin, a Harlem Globetrotter Ambassador of Goodwill, came to Owensboro to speak with students at Newton Parrish Elementary on Tuesday afternoon. As he ran through the gymnasium doors decked out in his official Globetrotter warm up suit, he was greeted with screams and cheers from the students and staff, but it wasn’t enough. He walked out.

And then he returned to even louder shouts. McClurkin began his message with a brief biographical history about not playing basketball growing up because he apologized for fouling a teammate. He even discussed how he had a coach tell him all he wanted to do was smile and dunk.

“And today, I get paid to smile and dunk,” McClurkin said. “In fact, I am in the Guiness Book of World Records for the most dunks in a minute.”

He is also a record holder for three other basketball feats and all can be Googled, he told the audience.

Originally from Ohio, McClurkin went to college in North Carolina and then to graduate school in Ohio while playing professional basketball.

“Education has always played a huge role in my professional development,” McClurkin said.

Prior to being a Globetrotter, McClurkin played for the Washington Generals, the rival “team” of the Globetrotters. When he played for them, he said he would leave the floor after a game and kids would stick out their hand to high five him — and then fake him out. Now, he said, he likes to “fake the kids out” as a Globetrotter.

He has been a member of the Harlem Globetrotters for eight years and originally came on the team for his dunking, which is his signature move. In fact, his nickname is because of his “thunderous dunks,” he said.

His favorite trick now is the praying-hands-spin-the-ball-on-your-finger trick.

“I don’t know a smaller name to call it,” McClurkin said.

McClurkin is one of 50 Globetrotters who visit schools to promote the Globetrotters’ anti-bullying campaign to over 120 countries and provinces around the world .

McClurkin interacted with the audience by playing clapping and listening games which required crowd participation, often making faces and gestures when the audience missed the cues. Giggles and laughter filled the air as McClurkin prompted the audience with tasks.

The presentation soon became serious, and McClurkin shared the anti-bullying message the Globetrotters are sharing as part of their community outreach program.

Founded in the 1920s, the Globetrotters are one of the world’s most well-known basketball teams known for their hijinks and hilarity mixed with athleticism. And McClurkin did not disappoint this crowd.

With an interactive spelling of T.E.A.M (Talk, Empathy, Ask Questions, and Mobilize), McClurkin involved students in the explanation of the acronym, calling one down to stand for each letter. Near the end, he included two teachers that would be good people to go to for a T.E.A.M. talk.

“Sometimes, situations arise at school and we end up with bullies,” McClurkin said. “And when a bully is in your school, school is not a safe place. Your school should always be somewhere safe. You have every right to come here and learn and socialize with your friends, and if your school isn’t a safe place, you don’t feel like you have the right to do that.”

McClurkin ended the program with his famous one-handed slam dunk as the crowd erupted into cheers.

“If you are a nice person…there is a place in this world for you,” McClurkin said. “Just be who you are.”

The Globetrotters will play over 320 games this year in 260 cities, and they practice “all the time” as they arrive in a city and practice tricks for two hours before their performance.

“You will see some high-flying slam dunks, have court trick shots and crowd participation that is unrivaled in sports,” McClurkin said.

The Harlem Globetrotters will be at the Owensboro Sportscenter on Dec. 6 at 7 p.m. and McClurkin said the adults are just as excited to see them as children.

“You should see the faces of the adults,” McClurkin said. “That is what I think is really cool. While the kids are there, a lot people have never heard of the Globetrotters — the younger generations — and the way it continues to be a tradition is that parents will bring their children and then later on, hopefully, they will bring their children, because you never forget about the way the Harlem Globetrotters make you feel.”

Tickets are on sale at harlemglobetrotters.com.