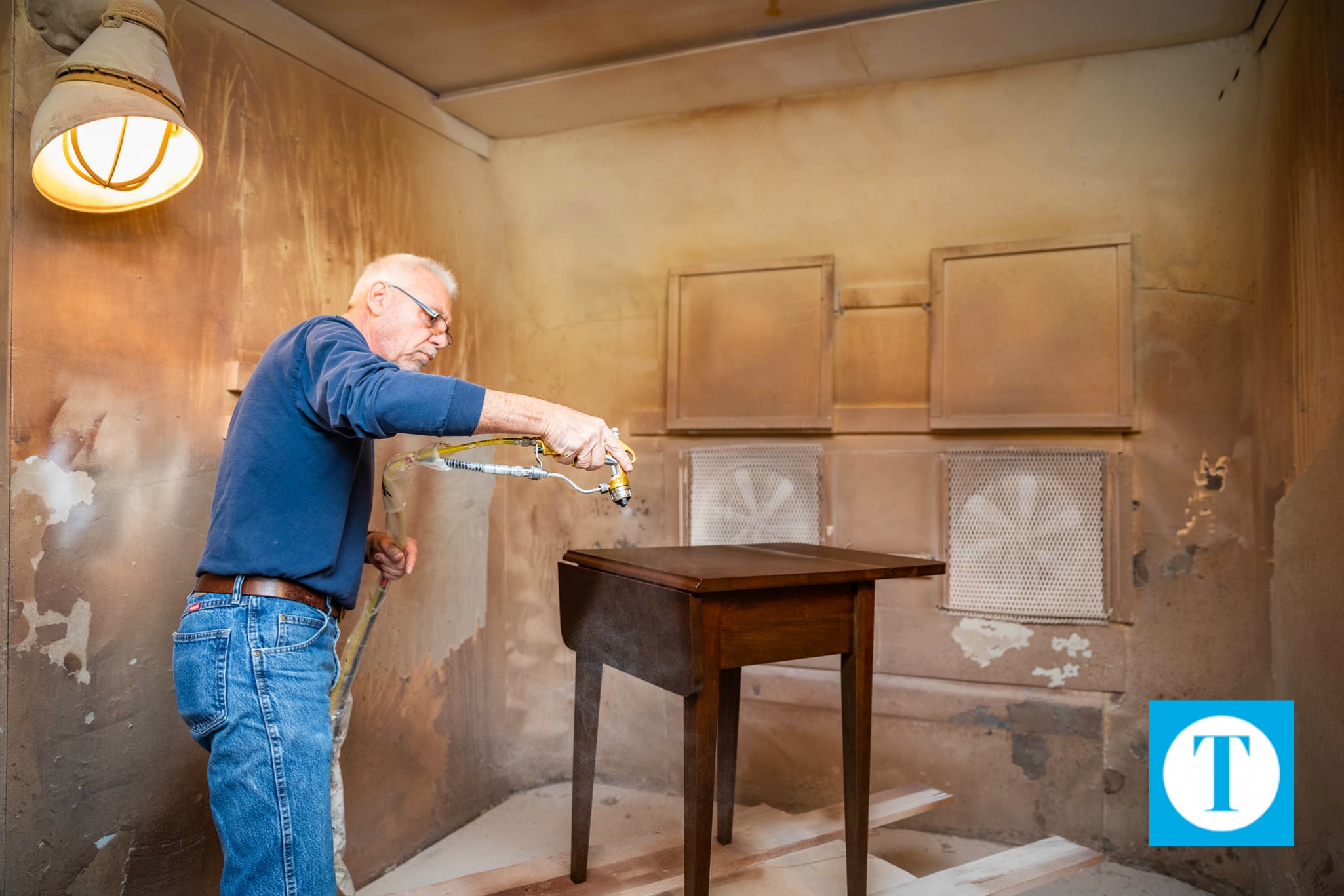 These days, consumers like to know where the things they eat, drink, and wear originate. Locally sourced products are a point of pride, and artisan crafted items are highly sought after.

Tom Blue Furniture in Owensboro has been turning out handmade furniture for nearly a century. People zipping by the Veach Avenue showroom may not know they are passing one of the very few remaining shops in the country where customers can order custom furniture crafted by hand.

At almost 90 years old, Perry Blue still comes into the store nearly every day. He said when he was a student at Owensboro High School in the late 1940s, he “couldn’t wait” to get to work after school. Decades later, he still enjoys the atmosphere of the business his father started and his daughter and son-in-law, Ruth Ann and Mike Mason, now run.

Blue’s father, Tom Blue — for whom the store is named, was a finisher for the Willett Furniture Company in Louisville, until the 1937 flood forced him to move to Owensboro.

He soon started a shop behind his Seven Hills home, where he repaired and refinished furniture. In 1949, having added on to the original shop “until it was at the back door of the house,” according to Perry Blue, Tom Blue relocated his shop to the current location on Veach Road.

Today, that shop still stands just to the right of the modern showroom with its blue awnings. In it, Mike Mason handcrafts reproductions of traditional American furniture, an art he learned from his father-in-law and practiced in his spare time during his first career. He does it mostly alone and said that “it’s hard to find people that are interested” in learning how to use the tools that fill the workshop, which is crammed with textures and smells that seem to be reminiscent of another decade. It’s hard not to notice the wheeled, flat carts that are the real version of the same thing often sold as vintage coffee tables in expensive home décor stores.

Tom Blue has about 85 antique reproductions in their repertoire. These pieces can be commissioned in a variety of woods, but most of their work is done in cherry or walnut. Customers can request to have measurements and designs tweaked.

Mike reveals he recently had a woman from Texas call and order a bed, but asked to change a few specifics. Orders from out of state are common, he said.

“People know about us because their mothers and grandmothers had pieces, and they want more,” Mike Mason said.

Copying older pieces is how Perry Blue’s father transitioned from repair and finishing into making new pieces. When Perry Blue took over in the mid-1950s, he added upholstered furniture, lamps, and accessories to the showroom. That showroom burned to the ground in 2004, and every sample of the handmade line was lost. Luckily, Mike Mason and a good friend had been just so happened to have photos of the originals, which Mike is still working off of today.

Perry Blue jokes that he and Mike have a “difference in opinion” on whether or not to add modern conveniences like touch-shut drawers to classic pieces. Perry looks at such things as “one more thing to break.”

A trend that he “just can’t get over” is the fact that the distressed look is popular.

Trends may come and go, but a Tom Blue piece is a heritage piece, whether you buy it off the showroom floor, come upon one secondhand or commission it from reclaimed wood with a personal meaning he said.

Ruth Ann Mason said people call “every day” wanting to know the value of pieces in their possession. The pieces hold their monetary value, but of course, the sentimental value of a corner cabinet that elicits memories of Thanksgiving in Grandmother’s dining room has more sentimental value than dollars can tell.

The Tom Blue tagline is, “Furniture with a Future.” As Perry Blue said, “You buy a house with the future in mind; why wouldn’t you do the same with your furniture?”