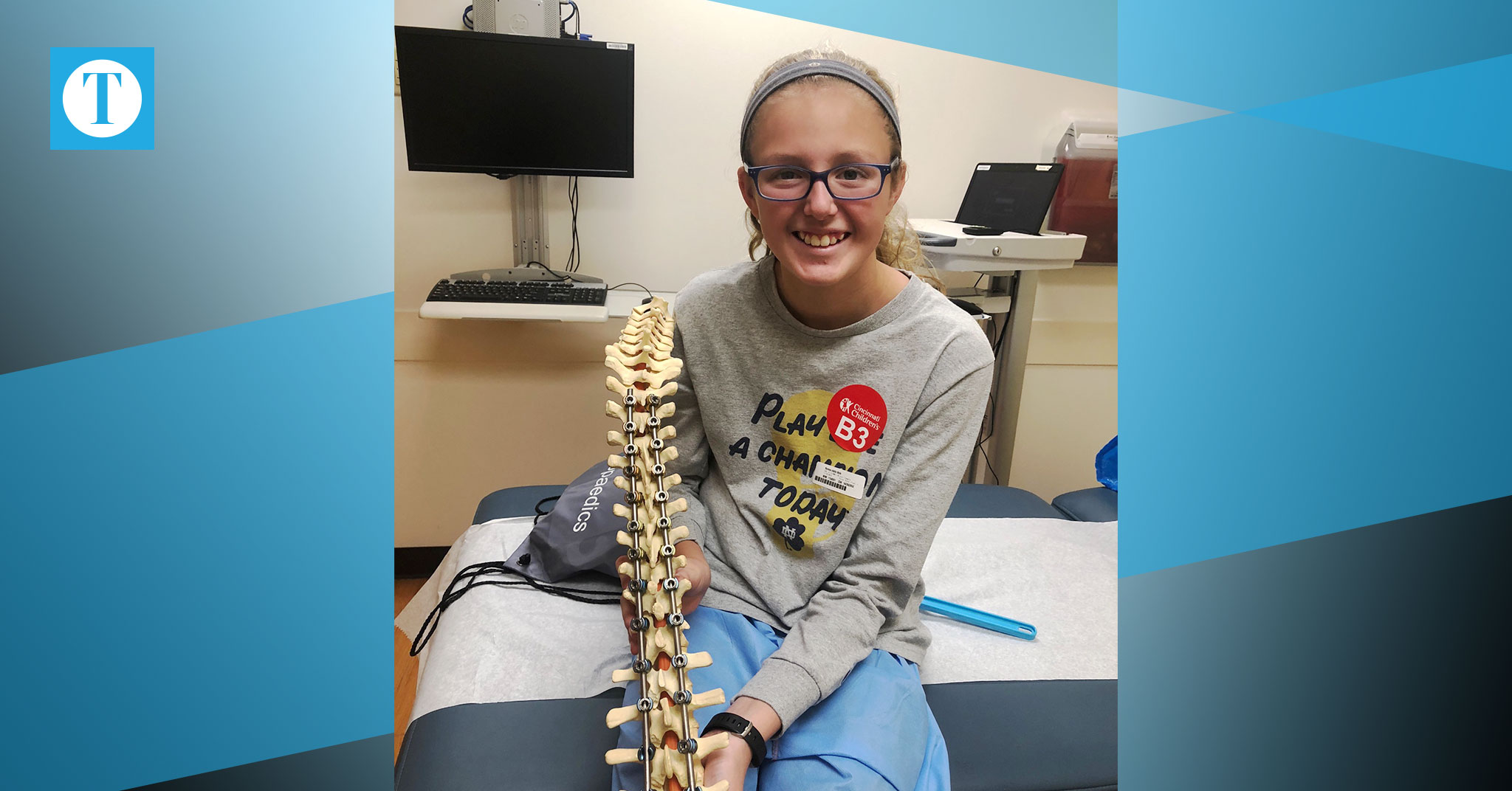 June is National Scoliosis Awareness Month and for one local family, that now means more than ever. On June 12, Addie Belle Rutman and her parents, Chivonne and Ryan, celebrated the almost 11-year-old reaching the six-month post-surgery mark. In December, Addie Belle underwent a seven-and-a-half-hour surgery at Cincinnati Children’s Hospital to correct her severe scoliosis.

These days, she’s back to normal and eager to help other young people who face the same condition she faced.

The Rutmans first learned that Addie Belle had scoliosis during her routine well-child check at age seven. Chivonne said Josie Kroeger, a physicians assistant at Owensboro Pediatrics, checked Addie Belle’s spine earlier than normal because Addie Belle had grown so tall so quickly. The check simply involved bending at the waist and looking for a curvature of the spine at the base.

“I could see it in her eyes,” Chivonne said, adding that it was immediately obvious that Addie Belle had scoliosis.

According to Kidshealth.org, healthcare providers look for any abnormalities in the back and ribcage and measure scoliosis curves in degrees. With a mild curve measuring less than 20 degrees, a moderate curve between 25 degrees and 40 degrees and a severe curve more than 50 degrees.

At the time of her diagnosis, Addie Belle’s curve was a 12. By the time she turned ten, it was a 68. Though Addie Belle said the only thing that bothered her was that her shoulders hurt because “one was higher.”

Between the initial diagnosis and the fall of 2018, when it became obvious that spinal fusion would be necessary, Addie Belle was fitted for and wore a custom brace to try and correct the curvature. She says it was uncomfortable and made her feel like she couldn’t breathe. It was also visible through her clothes, which made her self-conscious.

“I just remember lying on my bed talking to my parents about how I didn’t want to wear it, and they said, ‘Would you rather have surgery?’ and I said ‘yes,’” she said.

Chivonne said that eventually, the risks of not having the surgery were more dangerous than they even appeared.

“Her spine would have punctured her lungs and put pressure on her heart,” she said.

The surgeon the family eventually selected, Peter Sturm of Cincinnati Children’s, recommended not letting the problem go past spring break of 2019, but Addie Belle elected to have it done over Christmas break of 2018, so that she would miss as little school as possible.

Leading up to the surgery, Addie Belle said her fears were mostly related to what she would or wouldn’t be able to do after surgery or for the rest of her life.

One thing that Chivonne said was very helpful was a pre-surgery class at Cincinnati Children’s where girls that had previously undergone the surgery spoke about what to expect.

During the surgery, two titanium rods and twenty screws were placed in Addie Belle’s back and her vertebrae were fused from T1 to L3. Simply put, her mother said, that’s a major surgery and a huge amount of hardware for anyone, let alone a ten-year-old girl.

The pain following the surgery was beyond intense, “a 10 out of 10 some days,” for Addie Belle a young athlete, who swims competitively, plays golf and volleyball. As parents, Chivonne and Ryan said they felt helpless seeing their child in such pain.

“I’m just really super proud of [her] and how she’s handled the whole thing….she never acted worried or scared,” Ryan said. “All the way up to the actual morning of surgery, the only thing she was scared of was getting the IV put in her arm. It was a tough couple of months for her, but she kept smiling and just being a kid. I couldn’t be more proud of her.”

Addie Belle stayed in the hospital for a week before recovering at home for six weeks. Since then, she has recovered quickly and fully. At her six month post-op this week, she was cleared to dive into the pool and do everything except jump on the trampoline.

“I will never be able to skydive, but my mom’s okay with that,” she said.

The family, which includes six-year-old sister Charleigh, is relieved to have the experience behind them. Because it was so helpful to have questions answered by non-medical people who had similar experiences, the Rutmans want to be able to do the same thing. They are working on starting a Western Kentucky chapter of Curvy Girls, an organization devoted to supporting patients and parents through their scoliosis journey.