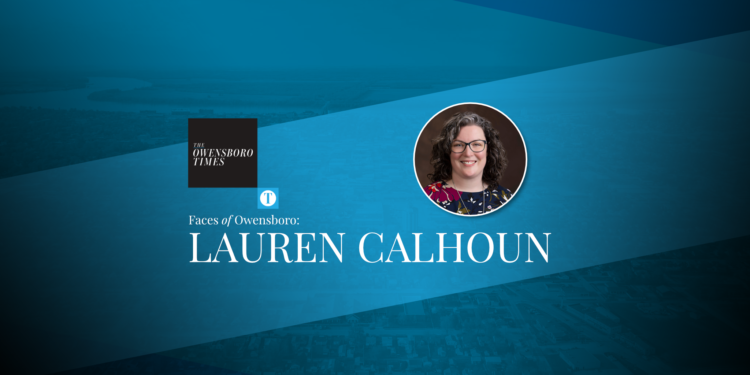 This is the latest installment of a series featuring local people with unique job positions who also play active roles in the community. In this installment, meet Lauren Calhoun.

A billing supervisor by day, Lauren Calhoun dedicates much of her time to the arts by night. The local musician and actress recently showcased her talents in the musical production Bright Star, where she received glowing reviews for her performance in the lead role.

Calhoun played Alice Murphy in the Encore Musicals performance, where she managed to successfully portray the life of a woman going through a number of hardships throughout two different stages of her life. In the role, Calhoun played Murphy at both 16 and 38 years of age.

“Alice Murphy gives birth to a child out of wedlock, and she also goes through a number of other challenges,” Calhoun said. “Without giving too much away, she reconnects with her childhood love. The story is heartbreaking, and sweet, and innocent in a way.”

Though playing a woman at two different ages may seem difficult, Calhoun said she was able to understand and empathize with Murphy’s character on a lot of levels.

“Alice and I are very similar people. The role is a combination of imagining and remembering,” she said.

When Calhoun isn’t using her vocal and acting talents to mesmerize audiences, she’s working in a management role at Owensboro Health, where she provides her team with support as they follow up on insurance claims.

She also plays a large role on the Arts and Healing Committee, overseeing a variety of events that merges the medical side of the industry with the creative.

When possible, Owensboro Health’s Signature Series provides patients and employees with creative outlets and performances onsite. The Art Cart, Calhoun said, is taken to rooms so that patients can make cards and use coloring books while they stay at the hospital.

The Signature Series also brings the arts to the hospital in another way. The Arts Channel was implemented to give patients the ability to watch performances from their rooms.

Calhoun said she and the rest of the Arts and Healing committee strive to promote healing through artistry.

The arts have remained an important outlet for Calhoun as well. She was cast in her first performance at the age of 5 through Theatre Workshop of Owensboro (TWO).

She continued with theatre through high school before taking a break to perform in a cover band called Bad Kitty. But when she caught wind of a casting call for a local production of Sweeney Todd, Calhoun knew she had to give it a shot.

To no great surprise, Calhoun was cast in the musical and, since then, she hasn’t looked back.

Calhoun created Cabaret Nights at TWO, where on the second Tuesday of each month the community can come out to see five people perform. Calhoun said the events are heartfelt and memorable for everyone who attends.

“We sing songs, tell stories, laugh and cry,” she said. “It’s the most enjoyable way to spend a Tuesday evening.”

The friendships Calhoun has created, cultivated and cherished through the arts have been some of the best experiences she’s had in theatre, she said. And through those friendships, she said, she gets to truly enjoy the craft she does so well.

“The connections you forge with other people in the arts … you come to know them so well. You share an emotional experience every time you rehearse or perform together,” she said. “It is the biggest gift, and it’s a huge boost for your mental health.”