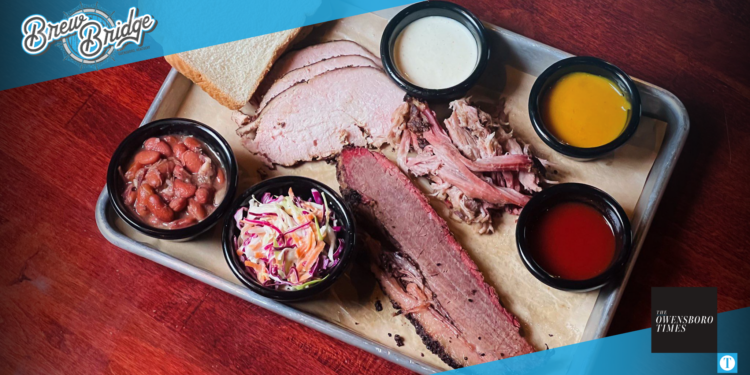 The team that introduced locally crafted beer to Owensboro is now excited to bring Texas-style barbecue to the city. Brew Bridge owners David Haynes, Max Garvin, and William Gomez have partnered with renowned chef and pitmaster Mike Pace to revitalize their menu, with barbecue as the focal point.

In just over a year, the brewery has evolved to feature 32 taps of beer — 20 of which are in-house — and 140 different bourbons. Haynes said significant kitchen renovations and the alliance with Pace would propel their kitchen to new heights, a vast improvement from its early days of serving appetizers.

“It’s always been our dream to bring a different style of food to Owensboro,” Haynes said. “This is a different take on barbecue that Owensboro folks aren’t accustomed to eating. We love Owensboro’s three barbecue staples – Moonlite, Ole South, and Old Hickory – and we knew we couldn’t compete with them. We just want another option for people.”

Haynes described their version of barbecue as simply seasoned and so tender that it falls apart on your plate. Rather than being sauced while cooking, meats ranging from brisket and pulled pork to chicken and turkey will be accompanied by three house-made sauces: tomato-vinegar, Alabama white sauce, and honey mustard.

The new menu also boasts updated sides and appetizers that range from Mexican-style creamed corn and green beans to an interesting take on coleslaw on brussel sprouts. At the request of their customers, Haynes said they would keep many of the same burger and salad items while adding their take on pasta.

Pace is no stranger to the Owensboro area, growing up here before spending part of his high school career in Indonesia. After attending culinary school in Louisville, he sandwiched 6.5 years working in Austin, Texas, between two stints at the Miller House.

“I came home from culinary school to help open the Miller House before moving to Texas,” Pace said. “I fell in love with the food down there. I had never had brisket until I moved there. I learned how to make it from friends who had spent their whole life perfecting the craft.”

After returning to Owensboro from Texas, Pace returned to the Miller House. He initially reached out to the guys at Brew Bridge because he wanted to educate himself on the brewing process.

“I initially came to Brew Bridge to learn the brewing process,” he said. “One thing led to another, and I was promoted to kitchen manager. Now, we’re trying to convert this place into a great barbecue joint.”

Pace said his brisket and side dishes are heavily influenced by Texas, while his pulled pork will more resemble a Carolina style.

The Brew Bridge offers indoor and outdoor seating, thanks to a lively patio equipped with ping pong and yard games during the warm months. They offer outdoor, heated tent rentals during the colder months.

They most recently purchased a trolley, which offers rides in the downtown area and by appointment. They are in the process of installing tap handles on the sides of the trolley so they can use it as a beer truck for various events.

Brew Bridge is located at 800 W. 2nd Street. For more information about food and drink offerings, visit their website here or their Facebook here.