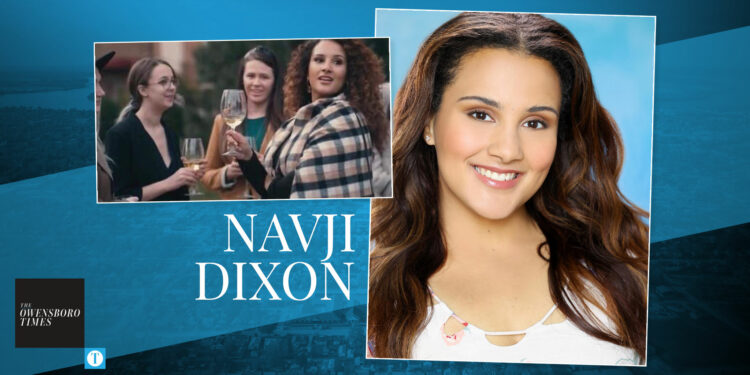 Owensboro native Navji Dixon has enjoyed theatre since she was a young girl. Her path has provided her a wealth opportunities to succeed in the arts, most recently landing a role in A Glass of Revenge, premiering on The Lifetime Movie Network in May 2022.

“My family lived overseas in Europe for the first part of my childhood, and had little access to normal extracurricular activities,” Dixon said. “My mom always knew I would thrive in a creative outlet. She took me to auditions for a production of The Jungle Book with Missoula Children’s Theatre. I was hooked.”

Dixon joined the drama club at her school on the military base, and the love for performing followed her when she moved back to Owensboro.

“I did anything I could get my hands on: school musicals, Theatre Workshop, talent shows, you name it,” she said. “When I made the decision to join the Rose Curtain Players at (Owensboro High School), that was the first time I explored the possibility of making this a career after high school.”

Another first for Dixon was entering the world of competitive theatre, an opportunity where high schools across the state perform one-act plays in the hopes of advancing to the Southeastern Theatre Conference to compete against the top schools in the Southeast.

“This was like the Final Four in March Madness in the theatre world. It was exhilarating,” she said. “I think I spent more hours rehearsing in our black box theatre than I was actually in class.”

Dixon went on to earn her bachelor’s degree in theatre at the University of Kentucky, which she said only affirmed her dream of building a career out of performing.

“It seems as if shooting my first movie happened so quickly because it was my first real professional job I booked,” she said. “When I look back, this was the fulfillment of years and years of hard work.”

A Glass of Revenge tells a story of wine blogger Emily (Lynn Kim Do) who applies to join a competitive wine academy, just like her late mother did years ago. Emily is thrilled when she’s accepted into the prestigious program and hopes it’s an opportunity to save her family restaurant. With her father’s reluctant blessing, Emily heads to Napa Valley to begin the sommelier program where she befriends Lucia (Navji Dixon) and other members, uncovering the dark secrets about the academy and her family.

“It’s a Lifetime mystery, what more could you want?” Dixon said. “I’m looking forward to the work I’ll continue to do in the future. I want to tell more stories on screen and share that experience with other artists and audiences. However, I really want to soak up the present and be grateful for this incredible, life-changing opportunity.”

While she enjoys the thrill of performing, what pushes Dixon to keep going is the opportunity to tell stories in ways she’s never explored and to audiences she has never met.

“Someone somewhere is going to say, ‘This is my favorite movie,’ even if it’s just my grandma. I was once a young artist watching in awe of performers much older and more experienced than I was, and I’d like to imagine that maybe there’s a little me out there that is just as inspired by my performances as I was at that age,” Dixon said.

Embracing storytelling as a reflection of something every person on earth shares, Dixon feels blessed to have the platform she now holds.

“I want this film and any work I do, past or present, to serve as a torch for other up-and-coming artists in Owensboro. Kentucky has so much talent and I’m ecstatic to see more representation in the industry,” Dixon said.

After the announcement of her upcoming role hit social media, Dixon said the support has been incredible.

“I have been blown away by the support of Owensboro, and I couldn’t be happier to represent my hometown,” she said. “I also truly would not be in my position had I not been blessed with supportive parents who never questioned my passion for the arts and always encouraged me to chase my dreams.”