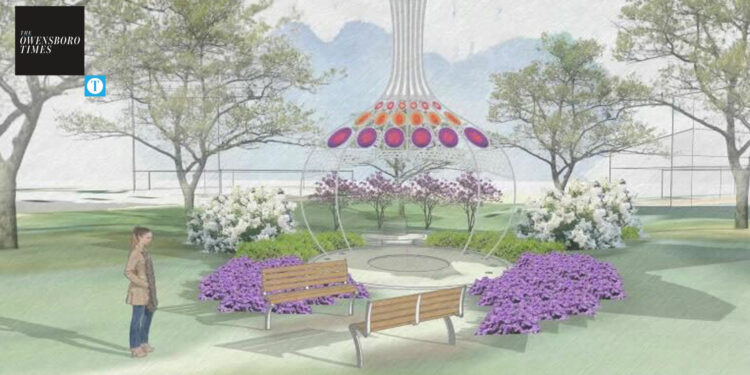 As a way to celebrate the life, art, and teaching of the renowned glass sculptor, White had a vision of creating a space on the Centre College campus in Powell’s honor.

“He was a big mentor and such an amazing artist. So many people recognize his work. One of his pieces is in the collection at the Smithsonian; he was kind of a big deal,” White said. “I wouldn’t have my studio or career if he didn’t exist.”

When White, a 1991 graduate, was a student at Centre majoring in law, he never would have guessed he would end up with a career in art. He attributes much of his success to the late Powell, who employed White as an assistant for glass blowing.

“As an elective, I signed up blindly to take a glass blowing class. By the end of the first class, I was on (Powell’s) team helping to make his personal work,” White said. “I now joke that I have a minor in glass blowing, but that doesn’t exist.”

After White was accepted to the University of Kentucky for law school, he soon realized his heart was somewhere else. A year in, he knew he really wanted to continue glass blowing, working for Powell as his art was taking off.

“I travelled with him — to New York, Japan, many places — meeting other artists, seeing how the gallery world worked. His career was taking off in the years that I was with him,” White said. “He had three or four main assistants. I was the lowest guy on the ladder, and later became the chief so to speak.”

White is honored to see his dream to honor Powell come to fruition, utilizing the support of several of his former students, friends and family.

“We are building a 25-foot tall structure on a beautiful part of campus,” he said. “There’s a view of the eagle and a view of the roof of the original studio. Sure, maybe this was my idea, but I’ve been assembling a team like the Avengers.”

After months of seeking philanthropic support, the project is nearly funded.

“Due to Covid it took me longer to get traction. I kept knocking on doors and making phone calls. Right now, it’s about 90 percent funded; with supply changes, metal prices and lumber prices are going up everyday. I budgeted once and now it’s a different number so we are still accepting donations,” White said.

The design was unveiled recently, and the project broke ground this month. It is set to be completed this fall.

“At first, it was just a crazy idea, but I kept getting so much support,” White said. “As with most things that Steve did, I feel like I’m on a mission and this is what I’m supposed to be doing.”