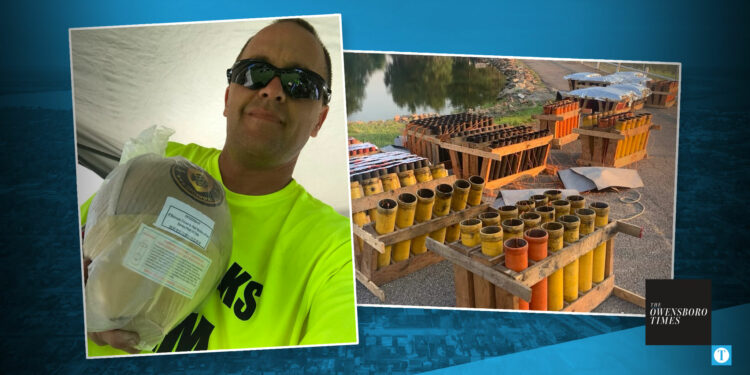 Stuart Snow has always loved fireworks. Snow, who works in the sales industry, has turned his love of pyrotechnics into a hobby — with opportunities ranging from helping put on local fireworks shows to assisting with pyrotechnics used in a commercial and movie.

Snow still has memories of a stand in his grandparents’ neighborhood where he purchased recreational fireworks.

“I had a blast,” he said of setting them off each year.

Now, after obtaining a federal fireworks license through the Bureau of Alcohol, Tobacco, Firearms and Explosives (ATF), Snow is allowed to purchase fireworks that the regular consumer cannot because they are regulated. It also allows him to create fireworks displays and work with other pyrotechnic companies.

One of those is Casabella Pyrotechnics out of Indiana, which has created many of the fireworks shows Owensboro and Daviess County have seen in past years. Snow has served in multiple roles during those events, either as one of the technicians when there is a single location or as the supervising tech at one of the sites when there have been multiple locations.

Snow said he has worked beside many pyrotechnic teams and also does research to design shows and displays, including figuring out what to purchase. When he is the supervisor of a show, his family and friends help him.

Snow said that in one of his pyrotechnic shows, he used gas mines which “makes fireballs.” Local advertising agency Tanner + West contacted Snow to include this feature in a commercial they were creating for Champion Ford titled “Blowing the Competition Away.”

“They were showing a car being blown up,” Snow said.

Snow also has some experience with the film industry. Anthony Survant, a writer and director for a movie titled The Trophy Hunter, contacted Snow about needing some pyrotechnic stunts.

“He needed a truck blowing up,” Snow said.

While in discussions for the film, Servant visited Snow and ended up filming the movie on his farm. The movie is currently in the editing phase.

Snow said he has another unique hobby interest in aviation, and with several aerobatics teams using pyrotechnics in their shows, Snow could one day combine the two.

“One day it might be a reality,” he said.

For now, he is just taking each hobby opportunity “as it comes.”