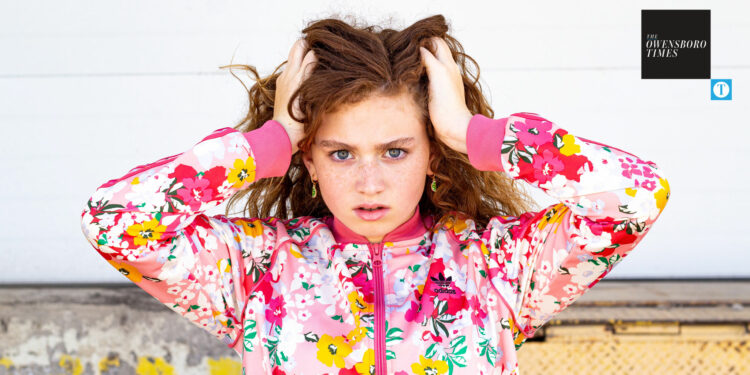 Stella Hayden, a 12-year-old singer and songwriter from Owensboro, made a statement with her new song Mean Girls and accompanying music video, which was released this past Wednesday.

Hayden has been writing music since she was 8 years old. She views it as both a hobby and a way to express herself.

“I know a lot of people journal when they want to get their feelings out,” she said. “Songwriting is my way of journaling and my way of getting out my feelings.”

Growing up, Hayden said that she just wrote little jigs and didn’t take her hobby very seriously, but there was something different about her new song Mean Girls. Her mom, Missie Hayden, noticed the difference as well.

“I remember very clearly the day that she went and wrote the lyrics to Mean Girls,” Missie said. “She had played around with other songs before and would sing them to me. They were good, but then she went to her room and wrote this. She brought it out and it was so catchy — it rhymed and it was written more like a rap to start. I was just so impressed that she went back to her room and 45 minutes later came out with a song.”

Mean Girls is the first song Stella has produced, and it tells a story that is very personal to her.

“I was being bullied by a group of girls and it was really upsetting to me,” she said. “One of my best friends, and I’m friends with her now, got sucked into that group and she turned against me and my other friend. That was just really hard for me, so I took my feelings out on a piece of paper and I wrote down the song.”

Missie said that she is thankful that Stella was able to turn her struggle with bullying into something bigger.

“It’s a way to put a positive spin on a difficulty that all kids face,” Missie said. “Whether it’s just being picked on a little or whatever, it’s just awkward to be in that pre-teen age range.”

Stella said she has always wanted to pursue singing and songwriting as a potential career and is now also interested in acting as a future job. No matter what path she chooses, her parents say they are behind her every step of the way.

“I want to be there and help her feel her best about it and give her any opportunity that her talent generates,” Missie said. “That way if it is something she wants to pursue then we can do it.

Mean Girls is available on Spotify, Apple Music and YouTube.