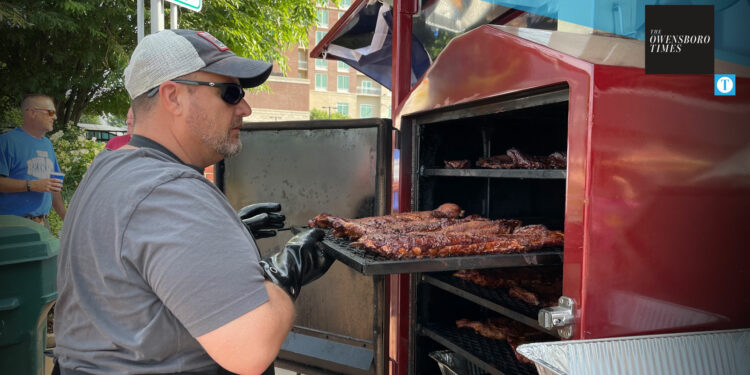 Brothers Charlie and Jason Dawson were born into a military family, spending their entire childhood in Owensboro. The two associate much of their upbringing with Owensboro-style barbecue, but Jason moved to Texas as an adult and was quickly attracted to Texas’ take on meat.

Since moving to Texas more than 20 years ago, Dawson has always aspired to bring his Texas cooking team to Owensboro for the famed International Bar-B-Q Festival. His good friend and business partner Darrin Garrison acquired a massive cooking rig a few years ago, and Dawson knew it was time to make the trek.

“My family has been going to the Bar-B-Q Festival for as long as I can remember,” Dawson said. “Darrin is my really good friend, and he’s been into cookoffs for years. I told him I had to get him to my hometown, you know, the barbecue capital of the world.”

Of course, the Texan laughed at the barbecue capital of the world mantra, but was excited to journey into uncharted territory as concerns over the pandemic dwindled. Garrison has competed across the country, but primarily in Louisiana, Texas, and Oklahoma in the southwest.

“The first thing we did when we got to town was going to Old Hickory and try mutton. The whole team liked it,” Dawson said. “I’ve been teaching him how to cook mutton and enjoyed introducing the entire team to how we do things in my hometown.”

Dawson said he’s found equally as much joy introducing his Texas buddies to Owensboro barbecue as bringing their Texas flare to downtown. He’s also taking great pride in showing off the beauty and hospitality of his hometown.

“It’s been great introducing people to new cuisines and cooking styles and hopefully opening up their minds to try new things,” he said. “There are several ways to cook meat, and there’s always something to learn. I think my team is leaving with a different perspective on Kentucky barbecue. “

The two styles couldn’t be more opposite from each other. Owensboro-style barbecue is traditionally mopped or dipped in a vinegar-based sauce and specializes in mutton, whereas Texas favors dry rubs and brisket.

“It’s an insult in Texas to ask for sauce,” he said.

Garrison is the crew’s pitmaster and said they would submit brisket and spare ribs for the competition. Other items on the menu included beef ribs and chicken thighs. Garrison had minimal expectations for the competition, understanding that their style could be foreign to most judges’ tastebuds.

He added that his first run-in with mutton was a positive one and that the town certainly lived up to the expectations set forth by Dawson.

“This place is beautiful, and downtown on the river is picturesque,” Garrison said. “We don’t expect to win; we know it’s different. We’re also cooking for Dawson’s family – it’s just been a great experience.”