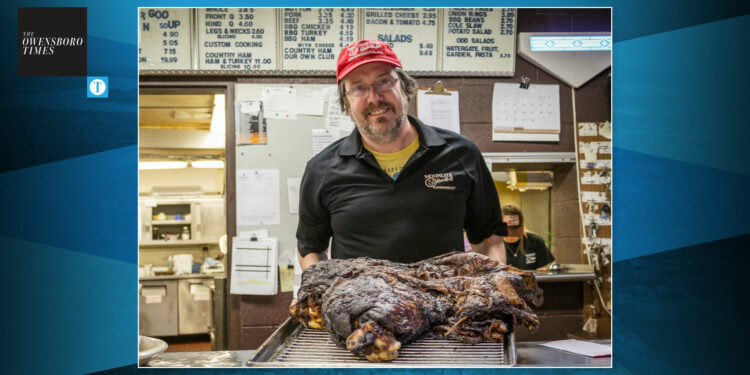 The International Bar-B-Q Block Party kicked off Friday and continues today. The annual celebration, along with Owensboro’s self-claimed title of “Barbecue Capital of the World,” often creates debates over everyone’s favorite type of pit meat. The one type of meat Owensboro is perhaps most well-known for — mutton (a sheep over a year old) — dates back to the 1800s.

Moonlite Bar-B-Q Inn Owner Pat Bosley said that most barbecued meats are considered too tough and are generally the most undesirable pieces of meat used.

“They were always the poor man’s food,” Bosley said.

Mutton began this way in America, although it is not unique to the United States. New Zealanders and Middle Easterners often use mutton in their cultural cooking, but it is not prepared as barbecue.

“It was a staple in the 1800s in America, but it fell off the menu due to urbanization and industrialization,” Bosley said.

Daviess County is home to many Catholic immigrants who settled in western Kentucky and began raising sheep for wool. As the sheep matured, the owners needed a way to cook the toughened meat of sheep — and needed to feed many as there would be no way to store leftover meat once cooked.

“Summer was perfect for this – a barn raising, a church picnic,” Bosley said.

And the Bar-B-Q festival (now a “block party”) pays homage to summertime gatherings.

Bosley said that Daviess County is “stuck in the middle” of not falling into urban or agricultural categorization, so this is how mutton has survived on local menus.

But, Bosley is quick to state that mutton cooked in Daviess County — and even all of western Kentucky — is uniquely flavored and is a signature dish of the region.

“We are the last pocket in America,” he said of how local mutton is prepared.

Using hickory wood and an acidic basting combination of water, vinegar, salt and peppers that breaks down the meat, and then slow cooking, helps turn the meat into the tender meal diners enjoy.

Old Hickory Bar-B-Q owner John Foreman said that it is the combination of the hickory and the length of time it is cooked — 22 hours for their mutton — along with what they do after that makes it special.

Events like the local annual festival have promoted the different flavors pitmasters add to their sauces, including Worcestershire, garlic, a variety of peppers and even sweeter ingredients like honey or sugar.

Bosley said the struggle that now exists is the generation that was raised on mutton is not getting out as much to eat it regularly, and many church groups and local pitmasters who used to enter cooking competitions are not sure who will carry on the tradition.

While mutton and barbecue are a staple for western Kentucky, the popularity of beef brisket and pork ribs from food channels and social media are driving people to experience local eateries with vintage offerings.

“Barbecue places used to serve the poor man’s food, but now it’s like dining at a steakhouse,” he said. “Now it is special occasion food, not everyday food.”

Foreman said that they used to serve more mutton than pork, but now it is equally split. He also agreed with Bosley that the food channels are promoting brisket as the best to barbecue.

However, Boseley said that since these meats are already on their menus, Owensboro is very poised to accept tourists looking for something exceptional because of what he calls the Holy Trinity – Bluegrass, Bourbon, and Barbecue.

“The marketing for this area is great,” he said. “People can visit distilleries on the Bourbon Trail, listen to Bluegrass music at the Bluegrass Museum, and dine on the local barbecue.”