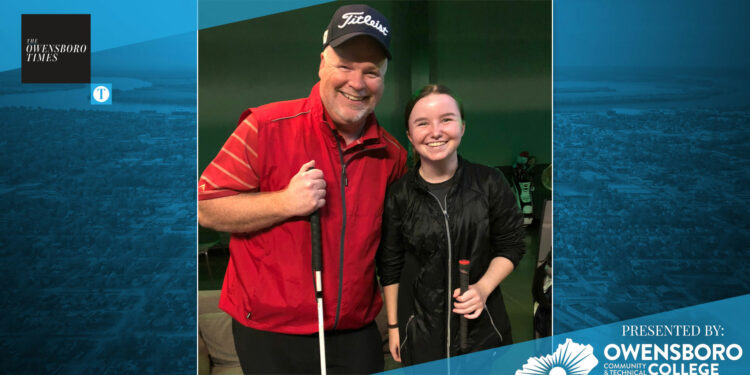 Owensboro is now home to the four-time and reigning U.S. blind golf champion, Chad Nesmith. Since his childhood, Nesmith has been an aspiring athlete, turning to golf when he lost his vision to satisfy his competitive itch.

Nesmith has a rare vision impairment called retinitis pigmentosa, an eye condition that attacks the retina’s live cells. One in 3,000 people are born with the disorder, but it typically isn’t detected until later in life because there are no visible problems or fine motor deficits.

“I wasn’t blind at birth – my eyes still looked normal. I had already learned how to center my head,” Nesmith said. “It’s like a time bomb in the retina that could go off anytime within the genetic code, and when it goes off, you develop tunnel vision.”

Nesmith said that tunnel vision gets progressively worse until the hole becomes so tiny that you can no longer see. He and his family first discovered the issue when he was playing football as a youngster and took a hit without ever seeing the guy in front of him.

“I grew up in Alabama and dreamed of becoming a college and NFL quarterback. I was always talented at a young age. When I took that hit, everything changed,” he said. “We flew to Houston for a specialist, and after two days of testing, they arrived at the diagnosis.”

The doctors told him he would never play football again and one year later took baseball from him; he said that crushed his soul. Unlike his same-aged peers, Nesmith said he missed out on several rights of passage because of the diagnosis, often making him depressed and angry.

He said he evaded crisis by surrounding himself with the right people and turning to Christ for guidance. He married at 27 and, after some encouragement from his wife at the time, resorted to golf in his late 30s.

“She kept telling me I need to find something that challenges me,” he said. “My response was always, ‘what do you want me to do?’ I wanted to be an athlete. I wanted to be competitive. She suggested golf because the ball doesn’t move, the target doesn’t move, and all you have to do is swing a club.”

Nesmith was initially skeptical, operating under the assumption that it was a sport for older men and people with money. The best athletes weren’t playing the sport in the late 1980s, but that all changed when Tiger Woods entered the scene, eventually drawing Nesmith to the sport.

“I got a lesson from the pro at the local municipal course. I remember telling the instructor, ‘you have one hour to convince me I can play this game,’” Nesmith said. “I never played any form of organized golf, much less had a lesson. During that first lesson, he taught me how to grip the club and one basic shot.”

After a few years of hard work and many more lessons, Nesmith had honed in on his skills, eventually developing the confidence to play the game with sighted people. The internet was still young, but Nesmith began to research blind golf and was able to explore some of the opportunities available.

In the early 2000s, he embarked on a mission to become the national champion of blind golf, bettering his swing and exploring stretching and lifting regimens to enhance his game. In 2016, he qualified for the national championships and won, winning again in 2017, 2018, and 2021.

He’s had several caddies and coaches over the years, all of which are volunteers and operate with one primary goal: navigating the 18-hole round safely. Nesmith values trust with his caddies over everything but said knowledge of the game is essential.

Nesmith works remotely for a national health care company and relocated to Owensboro to be close to his parents. He comes from Nashville and is most looking forward to the small-town feel and pace reminiscent of his childhood.

“I want blind people playing golf. I want to find some blind children and adults here, in Louisville, and anywhere in between and introduce them to golf,” Nesmith said. “There are opportunities out there, and I want people to understand that vision loss is no reason to quit competing. More people need to know blind golf exists.”

To learn more about Nesmith and his efforts, visit his nonprofit’s website here. His most recent efforts to further the sport includes participating in a documentary about disability golf. During this time, the director of golf at TPC Sawgrass, Matt Burrows, approached him about an opportunity.

Nesmith has participated in the Vision Cup – a Ryder Cup-style match that features the best blind players internationally vs. the best in the U.S. His newfound relationship with Burrows brought the tournament to the U.S. for the first time since its conception, with it being hosted at TPC Sawgrass.

“We’re 0-5 since the tournament started, and this is our first time hosting, so we’re planning on taking the title,” Nesmith said.

Nesmith is a member of the Country Club at Owensboro, where you can likely find him at the range or putting green bettering his game. He is a true disciple of the sport and especially appreciates every opportunity to discuss blind golf.

“I play golf for fun and to destress,” Nesmith said. “… When it isn’t fun, I’ll find something else to do.”