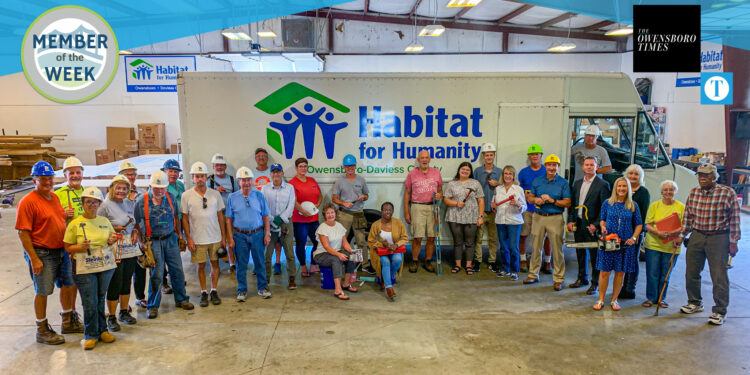 In the 1970s, Millard and Linda Fuller created the concept of “partnership housing” — an image centered around having those in need of adequate housing assist volunteers in the construction of decent and affordable homes. After implementing the concept in the Congo for 3 years, they returned to the United States and created Habitat for Humanity in 1976.

After collaborating on the build, the organization sells the homes to families with no profit or interest. Fifty locals formed the Owensboro Habitat for Humanity Affiliate in 1988, building seven homes in their first 5 years.

“From 1993-2002, the (Owensboro) group built 141 homes, and by the end of the year, we will have built or started on the 155th house in Owensboro-Daviess County,” said Jeremy Stephens, executive director of the local chapter.

Just 4 years before the conception of the Owensboro organization, U.S. President Jimmy Carter and First Lady Rosalynn embarked on their first Habitat work trip to New York City. As part of the Jimmy Carter Work Project, the nonprofit saw a substantial increase in affiliates around the country.

The organization is now in all 50 states and more than 70 countries, contributing to more than 22 million people having adequate and affordable shelter.

“Our mission is to put love into action,” Stephens said. “Habitat for Humanity Owensboro-Daviess County brings people together to build homes, communities, and hope. We are putting all our efforts into growing our organization and streamlining our operations.”

Stephens said they are seeing a drastic increase in the need for affordable housing in the local community. He feels confident they can answer the call with a new and enhanced workshop.

“We want to bolster our impact in Owensboro-Daviess County,” he said. “We have enough room in our warehouse to pre-fabricate walls for houses when the weather doesn’t allow our volunteers to be onsite. This means we can build year-round.”

The new location also features storage, allowing Habitat to buy supplies and materials in bulk when they cannot have them donated. Stephens said this saves the organization a lot of money annually.

Habitat comprises volunteers from all walks of life — some retired, some still working, some with specific skills, and others willing to help and learn.

“We 100% run on volunteers and are always in need of people who are willing to give their time for the benefit of others in their community,” Stephens said. “The common thread among all of our volunteers is they have a heart for our mission of making affordable housing available to everyone.”

Stephens added that the Owensboro community plays a pivotal role in their success, and they consider it a privilege.

Today, with a membership base of nearly 1,000, the Chamber is a guiding force in community and business development initiatives, serving as the center of business advocacy for the Greater Owensboro region.

To learn more about becoming the Chamber Member of the Week or inquire about Chamber membership, contact Shelly Nichols, Chamber Vice President, at 270-926-1860 or [email protected]