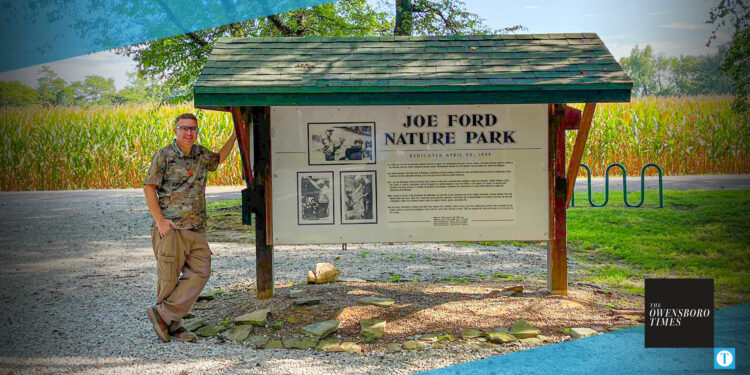 Long-time educator and nature enthusiast Dennis Millay was recently named director of the Joe Ford Nature Center. Millay has been a dedicated volunteer at the center and considers the position an excellent way to pay homage to one of his mentors, Joe Ford.

Millay vividly recalls visiting the Owensboro Science Museum with his father when Ford was the director — when it was located on South Griffith Avenue behind Kentucky Wesleyan College. Those visits instilled a passion for science and nature within him that has never perished.

“My dad used to take me to the science museum, and that’s when I first met Joe Ford,” Millay said. “I was always fascinated by dinosaurs,, and those museum visits made me want to be a dinosaur paleontologist. I ended up attending Brescia University and becoming a science teacher, and both of those led to more encounters with Joe.”

Ford kept his collection of findings and exotic animals on the bottom floor of the science building at Brescia during his tenure as a professor there. In 2005, Brescia University and the Fords established the Joe Ford Library to share his collection with the community.

In two years, exponential growth motivated the Fords to establish a board of directors and three years later, they recognized the need to relocate. In 2010, they achieved nonprofit status and moved the library to a small building at the Joe Ford Nature Park off of U.S. 60, where it stands today.

“They moved into this building and began doing programs, revamped the nature trails, and formed the nature center we know today,” Millay said. “Joe was famous in town for his snakes, so of course, they came too.”

Millay said they just completed their summer programs but they have many educational and fun opportunities planned for the coming months. Primarily relying on donations and fundraising for operational expenses, Millay said they have a Tales and Trails events scheduled for October 13 and 14.

“We’re going to have people dressed up and telling some of Joe’s favorite stories throughout the nature trails,” he said. “It will be like a guided tour with ghost stories along the way.”

After Ford visited Millay’s classroom just a couple times, he knew he wanted to start volunteering at the center. He began his time as a volunteer conducting programs with Grace, several of which he plans to bring back, none more than “Dinosaur Day.”

“We did this thing called dinosaur day where the entire day was dedicated to fun surrounding dinosaurs,” he said. “We would have fossil digs, get the snakes and reptiles out, and conduct an entire presentation on the prehistoric creatures. I definitely want to bring that back.”

To learn more about the center, pay them a visit at the Joe Ford Nature Park behind GRADD. Additional information is also available at joefordnaturecenter.com or by searching them on Facebook.

Home » Features » Millay takes over as director at Joe Ford Nature Center; excited to follow in footsteps of mentor