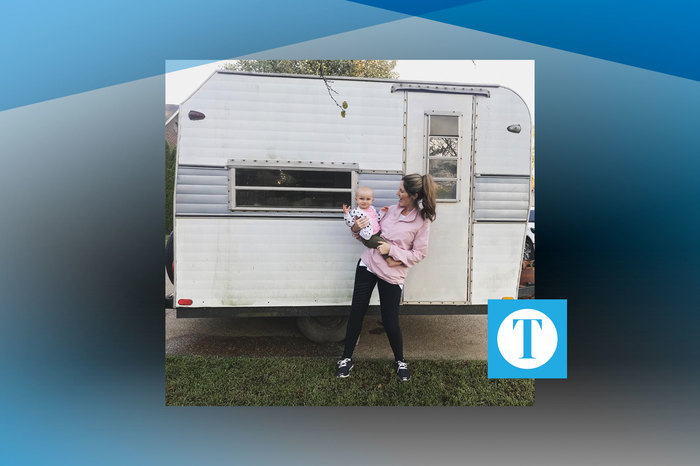 Jackie Smith had been making jewelry as a hobby for several years, occasionally selling a piece on Etsy or in her mother’s boutique, when she and her husband, Zach, found out that conceiving a child naturally wasn’t going to happen for them.

Even though Jackie and Zach both had good jobs, they knew that they would need an additional income source in order to afford any one of the expensive options available to start a family. So, she “ramped it up.”

Jackie’s jewelry line became known as Jackie Blue Handmade, a nod to the nickname her dad gave her because of her blue eyes.

Jewelry making became a business, and that business, according to Jackie was, “a huge blessing,” allowing the couple to make their dream of starting a family came true.

Today, Jackie continues to make jewelry, which has enabled her to go from full-time to part-time work. She now spends more time with one-year-old Channing and growing her business.

She is passionate about helping others feel pretty and making pieces for their special occasions or to match a jewelry item that they already own.

Quite some time ago, Zach told Jackie that she needed a little camper trailer to take to art festivals, and, instead of the standard white tent, she could sell out of the camper. Jackie had difficulty visualizing what Zack was talking about until she spoke to a vendor at the Squash & Gobble Festival in Greenville, Ky.

This vendor used a 14-foot camper to display the clothes she was selling, and Jackie saw how much easier it would be to stock a camper with her jewelry and not have to set up and take down her displays repeatedly over the festival’s days.

With inspiration driving her, Jackie “obsessed” for two weeks looking for the perfect trailer on Facebook Marketplace. Finally, she found the right fit in Illinois.

“My husband is amazing, and he drove five hours round trip by himself to pick up that trailer for his crazy wife,” Jackie said. “And he knew that along with that trailer comes a lot of work for him!”

Currently, the trailer is partially gutted with just a small kitchen area and closet remaining.  They will soon tear out everything but the studs and walls, leaving them with a blank canvas. The outside will be repainted as well.

Jackie, who is “overwhelmed with options,” isn’t sure what the finished camper will look like, but she is excited about the opportunities it will afford her at festivals. She also thinks it will make her stand out from other vendors.

Now, Jackie is preparing to “ramp it up” again, this time in order to share and sell her jewelry at arts & crafts fairs and festivals. And she can’t wait to begin. As Jackie puts it, I’m a “want-it-done-yesterday kind of gal!”

Jackie’s jewelry is currently being sold at Bella Ragazza, Shelley & Friends, Embellish, Byron & Barclay, Boutique 54, 270 Yoga and Yoga Loft or on her Facebook or Instagram @jackiebluehandmade.