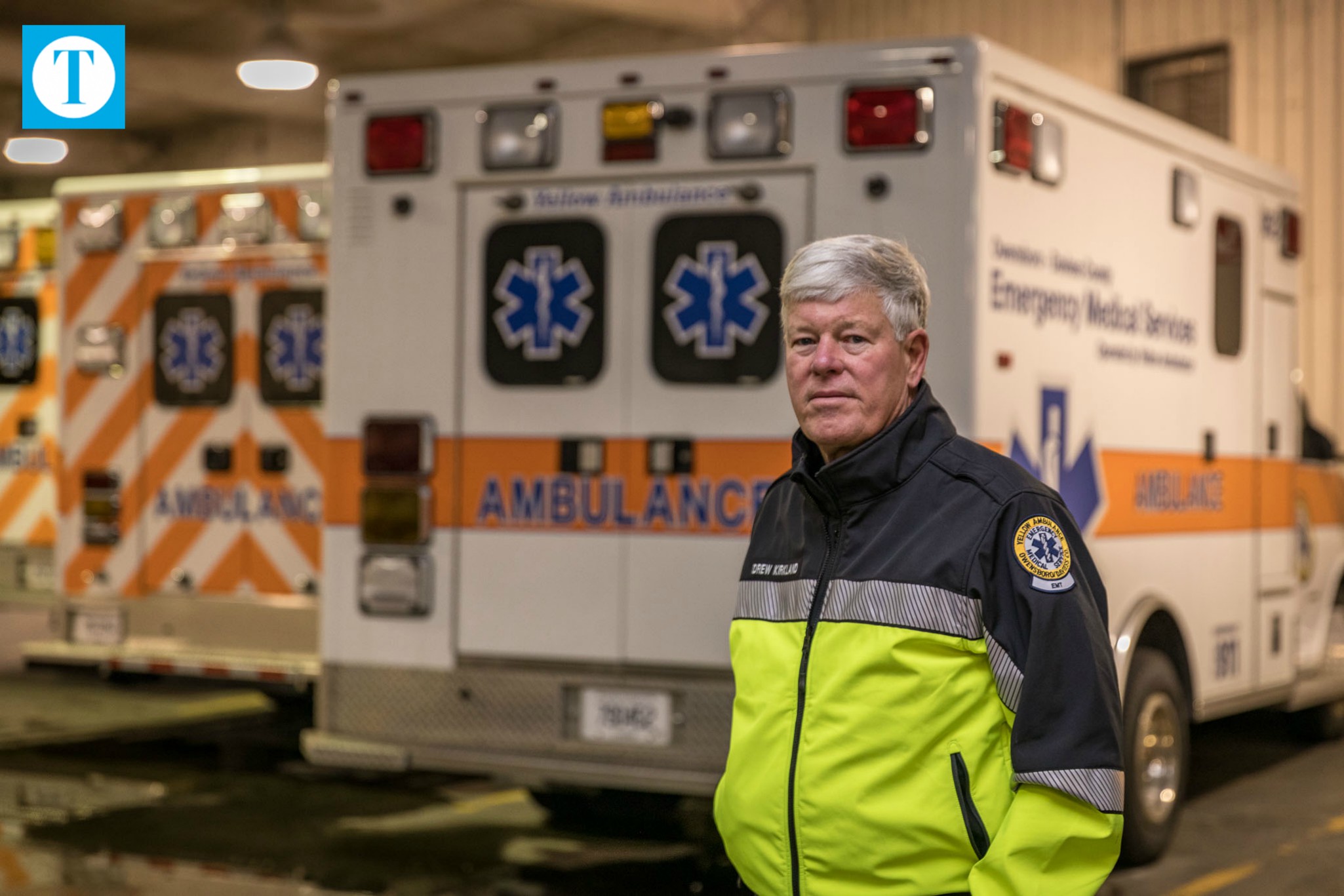 When Drew Kirkland decided to earn his certification as an Emergency Medical Technician (EMT) five years ago, at the age of 63, he didn’t realize he was going to have to get accepted to Owensboro Community and Technical College.

“I already have a college degree,” he told the registrar at OCTC, where the EMT class was offered.

With proper proof of his credentials secured, he soon enrolled in the semester-long three-hour class that took place every Monday and Wednesday night.

As the president of Dahl and Groezinger, a local scrap iron and metal recycling business, Kirkland has already had a long and successful career, but he found himself with a little extra time and decided he wanted to help people. Having already passed first aid and CPR classes, he decided to take the next step.

Although he still works at Dahl and Groezinger, Kirkland fills in with Yellow Ambulance Service on an as-needed basis when they can’t fill available shifts. Kirkland said he doesn’t sign up for regular shifts so he won’t be taking work away from any other EMTs. He works anywhere from three to twelve hours at a time.

“I enjoy going out and helping people…You feel like you’re helping families,” he said. “I enjoy being involved. It’s very rewarding to work with the people I get the opportunity to work with.”

Whether he is helping to transfer a patient from one hospital to another, treating a child with breathing difficulties as his mother watches anxiously, attending to a car wreck or helping the paramedics with CPR as the ambulance speeds down the street, lights flashing and sirens blaring, Kirkland just wants to lighten their burden.

“In Owensboro, we are fortunate to have paramedics in our ambulances who can give life-support systems right to your front door,” Kirkland said. “From top to bottom, they are very professional and very caring. It’s been an honor to work with them, to see what they can do and the life-saving skills they can perform.”

Kirkland said his ambulance co-workers and his wife, Gail, have been very helpful, assisting him in navigating a new world of technology that is much different than when he attended college.

When he started class at OCTC, the teacher said they would be doing a lot of work on Blackboard, so Kirkland started looking at the walls for the chalkboard. It turned out the teacher was actually referring to Blackboard, an online learning management system.

Gail, a retired educator, helped him send in his assignments, and his co-workers help him manage the reporting he has to do after each patient on a small, tablet-sized computer.

His EMT class included both academic and practical work, along with 24 hours in an ambulance and at least 12 patient contacts.

At the end of the class, he passed the National Registry Exam and will need to complete continuing education hours to renew his license every three years.

Kirkland may have mentioned his plan to become an EMT to his twin sons, John and Drew, who also work with him at Dahl and Groezinger, but he didn’t exactly broadcast it.

“It kind of surprised all of us,” his son Drew said. “We didn’t really know exactly what it was he was doing until we saw him one day with the ambulance crew in a reflective vest and full uniform.”

His sons attribute their dad’s EMT work to his hard work and generous nature.

“He has worked hard his whole life,” John said. “He has some time now and is picking out things he enjoys.”

And his other son, Drew, said what he enjoys is helping others.

“He has always liked to do things to help out around town,” Drew said. “This is something he could give back to Owensboro.”

Now 68, and older than most of his colleagues, Kirkland plans to keep at his second job for a while.

“Everyone I work with out there has been tremendous,” he said. “They’ve been very helpful. It’s a pleasure to work with them.”