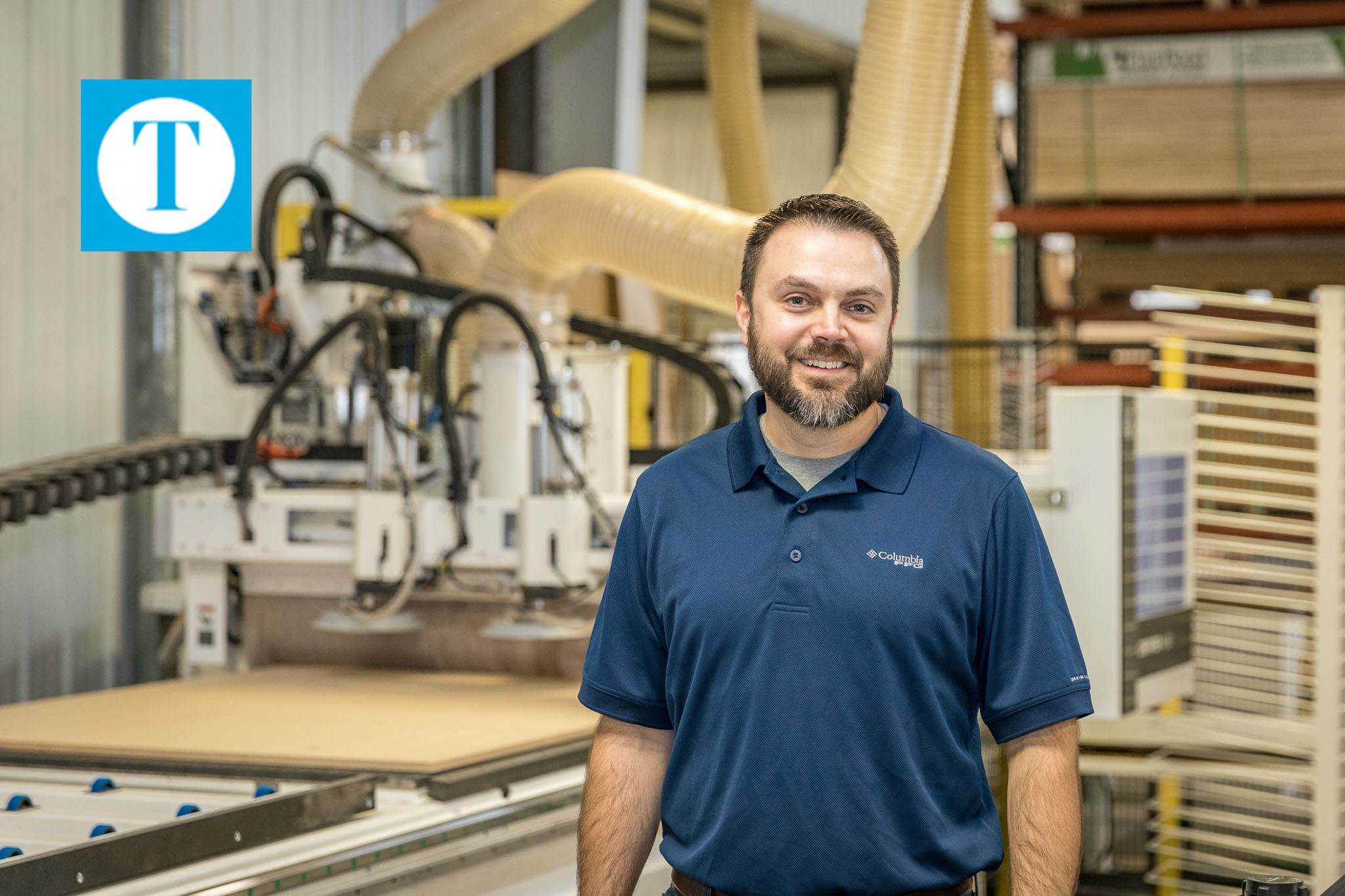 Phillip Crabtree stands by one of the robotically-driven machines that is Cabaxis. | Photo by AP Imagery

Phillip Crabtree doesn’t do things the way they have always been done. When he graduated from the University of Kentucky in 2000 with degrees in management and marketing, he could have made a good, solid living just working at Phill’s Custom Cabinets, the cabinet shop founded by his father. The business had one table saw, one sander, a good client base and a reputation for top-quality work.

Crabtree did join his father’s shop, but he didn’t settle for the predictable role. Instead, he innovated with a passion. Today, Phill’s Custom Cabinets shares a roof on Calhoun Road with a new company called Cabaxis, which builds cabinet boxes and drawer boxes for custom cabinet makers throughout the country. In the last two years, Cabaxis has grown from 18 to 42 employees, with another 20 likely to be hired in the next few months.

After some initial testing to make sure the new business was viable, Crabtree has invested $2.4 million in the last couple of years building the company. Their target customers are custom-cabinet makers throughout the United States, although most are located within a five-hour radius of Owensboro.

“The majority of kitchen cabinets manufactured in the U.S. are made by guys in tiny shops with no or few employees,” Crabtree said.

Cabaxis allows those cabinet makers to produce and install custom cabinets without having to spend valuable time building the actual boxes that make up the cabinets. Cabaxis offers free software to let the craftsmen design their cabinet layouts and order all the components they need, including cabinet and drawer boxes, doors and hardware. Cabaxis can also do the design for each project. Everything is shipped flat to the cabinet makers, who then assemble and install the final products. The Cabaxis product is intended only for cabinet manufacturers — not homeowners.

Crabtree calls Cabaxis a “solutions company.” Their service allows the cabinet makers to put together a final product faster and more inexpensively than if they built the components themselves.

“We’re trying to push the envelope building systems and solutions for guys like my dad,” Crabtree said. “We’re locating all those pieces and parts under one umbrella.”

Their solution also allows young people who have a propensity to work with their hands and want to get into the industry to do so with very little investment.

Two new robotically-driven CNC machines allow the company to ship all orders within five days of receiving the order. Twenty-five of Crabtree’s hires have come fairly recently, and he plans to add another shift to the plant by next summer, which would bring in another 20 employees.

“We’re always looking for good, solid, honest, dependable team members to be part of our family,” he said.

He’s also thinking much larger and is working toward adding three more plants in the next five years — likely in Texas, North Carolina and the Northeast.

According to Crabtree, the decision to become an innovator was not for himself but for those around him.

“I saw people who needed jobs,” he said. “I love seeing people who don’t know they’re passionate about something become passionate. To see my team succeed is what pushes me on to innovation.”

He hires people from all walks of life, including former members of the military, former teachers and members of a local recovery group called Friends of Sinners. He doesn’t just provide a job but offers counseling, inspiration and a safe place to fail as they get their lives back on track.

“They will always have a job here,” he said. “They have a springboard to be the best person (they) can be.”

His goal of making people’s lives better extends to customers as well.

“I’m selling them a solution that gives them margin in their life, that allows them to see their family,” he said. “Let me get this to you for less than you can cut it yourself. That to me is the driving factor. I love working with people and making relationships. I can’t wait to get to work every morning. I love it. I can’t get enough of it.”