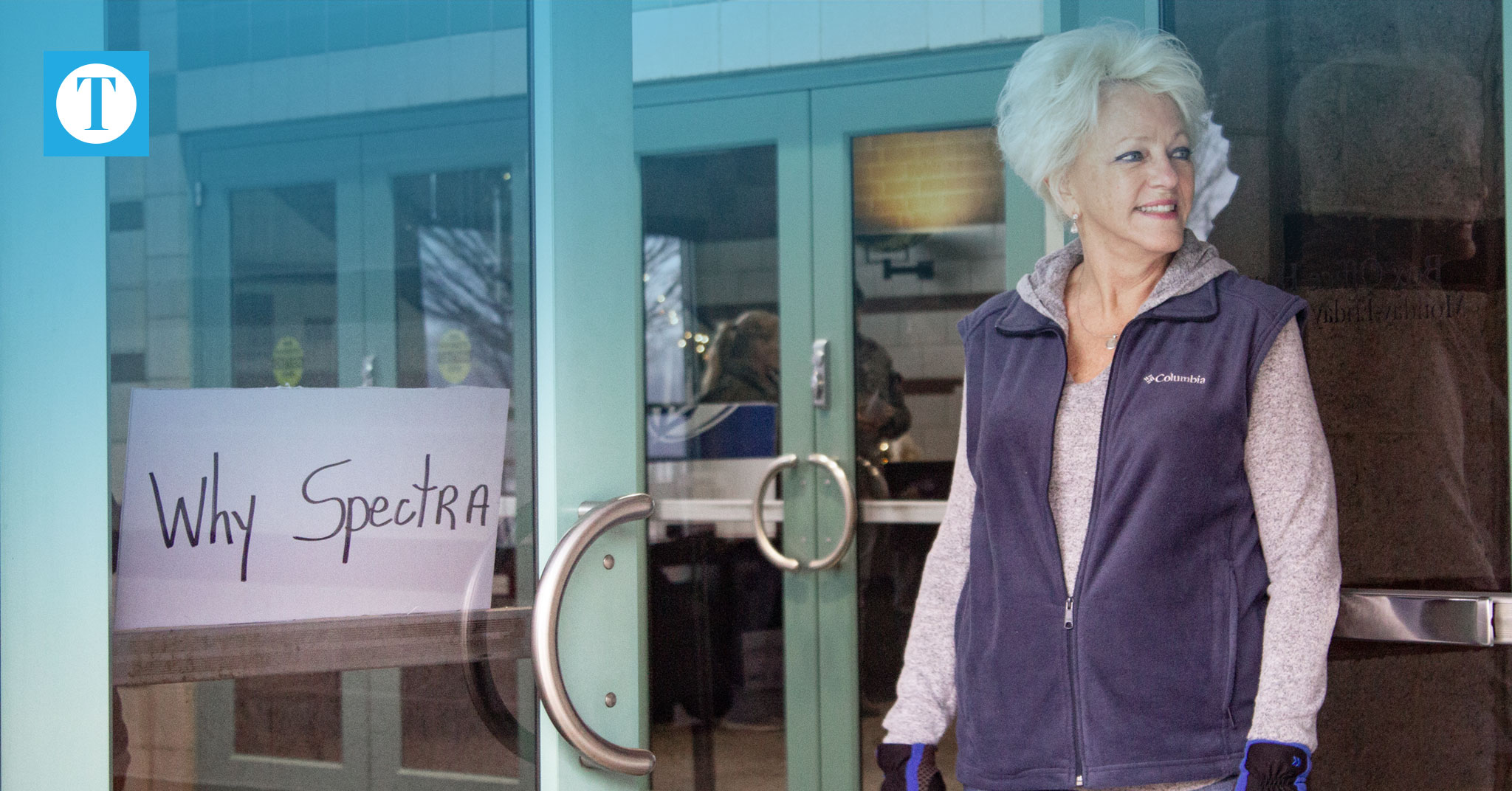 Former RiverPark Center board member Goldie Payne greets volunteers and board members at the door. | Photo by Owensboro Times

Volunteers and representatives from regular user groups filled the RiverPark Center lobby Monday morning to catch board members on their way into a closed session meeting. Signs saying “Why Spectra?” were placed on the entryway door, addressing a potential management takeover.

Goldie Payne, a previous RiverPark Center board member and concerned citizen of the arts community, said she had questions for board members regarding the lack of transparency regarding third-party management discussions.

“I feel, with us having a presence here, it might make them rethink some of the decisions and slow it down to give the public more input,” Payne said.

Board member Kirk Kirkpatrick addressed RiverPark Center volunteers for over an hour prior to the specially-called closed session board meeting. The volunteers believe they have been left in the dark regarding discussions of an outside management company potentially taking over the performing arts center. Kirkpatrick told Owensboro Times that the volunteer meeting was also a closed session and asked the media to leave the room. Those volunteers in attendance said they left the meeting with questions still unanswered.

“This was an attempt to appease the volunteers,” said Joy Gray, a retired educator who has been volunteering at the RiverPark Center for eight years. “I am leaving with a bad taste in my mouth. I am still very concerned.”

Gray said the volunteers were told “it didn’t make sense to have two managers and two maintenance staffs” so close, in reference to the Spectra-run convention center down the road.

“I think they will choose Spectra and I think it’s a done deal,” Gray said.

According to Faith Holley-Lutz, director of development and marketing, any nonprofit can struggle with income and expenses, including the RiverPark Center, which continues to grow its income base with fundraising, special campaigns and ticket revenue.

“We are looking for a way to keep the RiverPark Center sustainable, but there are many different ways to do that in keeping with our mission statement,” Holley-Lutz said.

RiverPark Center has one of the lowest donor attrition rates of any nonprofit Holley-Lutz has previously worked with.

“It shows that our donors are loyal and consistent not just with their money, but also their time,” Holley-Lutz said.

Conkwright, who said she and other staff members are very concerned with Spectra’s reputation, are anxiously awaiting the board decision after Monday’s specially-called meeting.

“We are ready to get this done and move on with our lives if we’re not fulfilling the board’s expectations,” Conkwright said, unsure if she and fellow RiverPark Center staff members will be kept on if a third-party management company takes over.