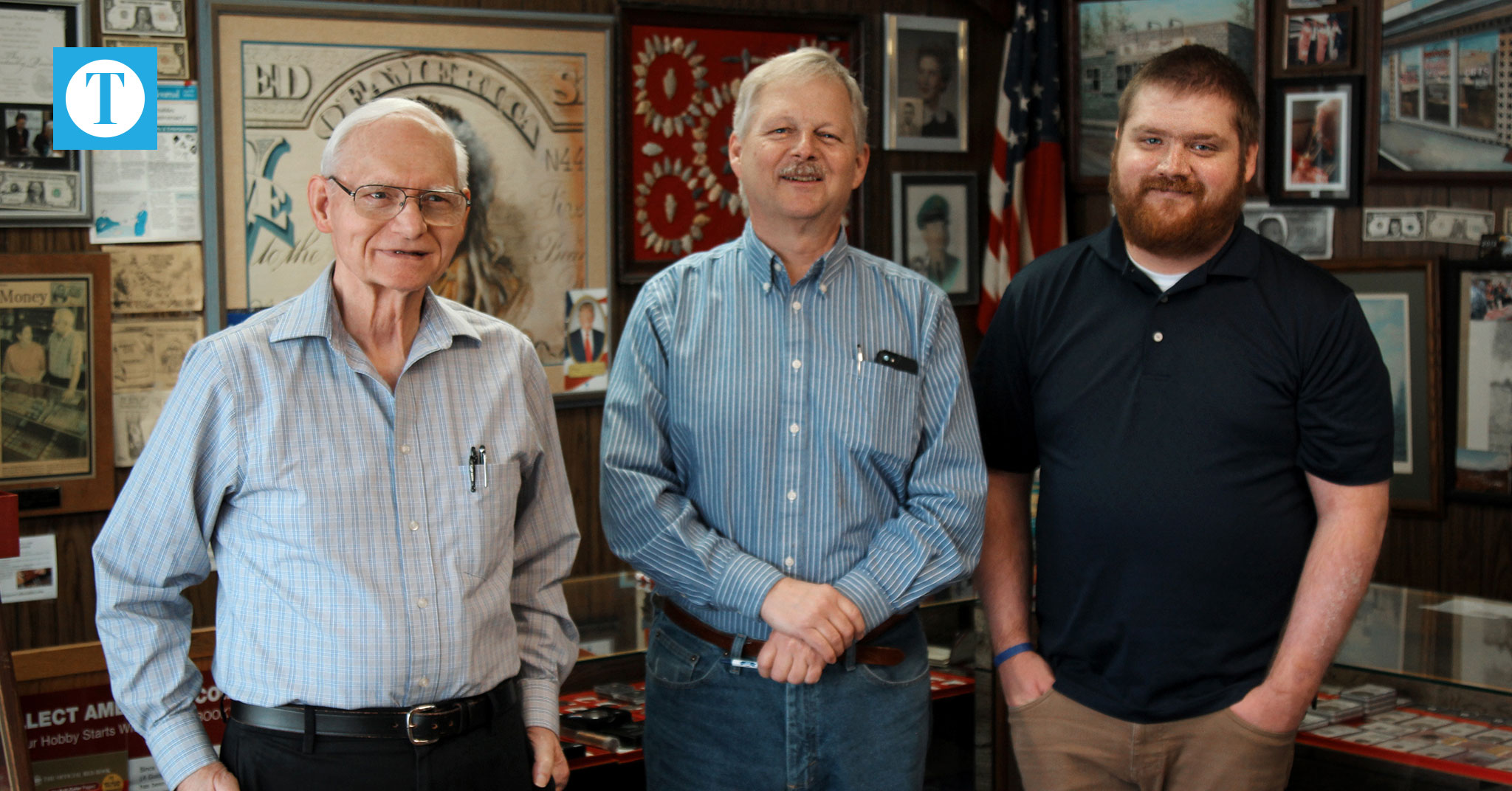 In business since 1964, Darrell Bruner works alongside his son, Kevin, and grandson, Kyle. | Photo by Daniel Benedict

Open since 1964, Bruner’s Collectables stands alone in the Owensboro collector coin business. Owner Darrell Bruner spent 32 years working at his store while also working at ATMOS Energy full-time. But for the last 27 years, he has been fortunate enough to focus solely on his coin business.

“There were three coin dealers in Owensboro in years past,” Bruner said. “We out survived everybody in Owensboro.”

Collecting coins was a casual hobby of Bruner’s before he decided to make a career out of it. Darrell Bruner said he started the collector coin business completely on accident. While spending several years serving in the U.S. Army as a medic, Bruner tried to figure out what he’d like to do when he returned home to Owensboro.

“It sort of just sprouted from an idea there,” he said.

The first location, Stop ‘N Swap, was on the same lot as modern-day JD’s Restaurant at 15th and Breckinridge. Established in 1964, the store specialized in antiques and old coins available to buy, sell or trade.

“My dad retired from the Glenmore Distillery and wanted to do something, and this was about the time I was getting out of the service,” Bruner said.

Since the initial shop opened, Bruner’s business has only continued to grow in size, collection and local notoriety.

“We started from nothing,” Bruner said. “I had one showcase back then. Now, we have nine.”

Equipped with four employees, three of whom are Bruners, Darrell works alongside his son, Kevin, and grandson, Kyle, as well as a close family friend, Kirk Bell.

Bruner’s Collectables carries a full line of coin supplies, from price guide books to the popular bullion silver and gold and even jewelry.

“I buy nothing much for myself. I’m thrifty,” Bruner said. “I put it all into the business and now it’s paying me back.”

From meticulously building an impressive collection in over 55 years, Bruner even has antique national bank notes from 1909 printed here in Owensboro. Only printed from 1862 to 1935, these issues were printed by local banks and chartered by the national government, also known as “hometown” notes, according to Business Insider.

From his personal interest and nostalgia, Bruner shared that he has a large collection of the Owensboro notes, but none are for sale, he said.

In addition to the unique Owensboro notes, the rarest items at Bruner’s Collectables include $20 gold pieces and a 1799 silver dollar.

To keep up with national rates, Bruner and his employees devotedly check the prices of newly minted gold and silver each morning before opening the store. Then, they write it down on a notepad for quick reference and check about ten more times throughout the day, as prices commonly fluctuate.

“It’s like checking the stock market,” Bruner said. “Sometimes, you’re going to lose, but it changes a lot.” By contrast, since antique coins are no longer made, their prices remain fairly stable with a gradual increase over time.

When asked about counterfeit currency, Bruner said, “They are definitely out there. We are used to seeing them.”

While not as widespread as several years ago, counterfeit currency is still an issue today. The United States Department of Treasury states that around 1 in 10,000 bills are counterfeit, for an estimated $70 million in counterfeit bills in circulation nationwide.

Bruner said that counterfeit coins are often made in China and Mexico. Less common counterfeits are printed here in the United States with top-notch machines.

“We have seen so many fakes that we recognize them right off,” he said.

Fake coins have many telltale giveaways, including weight differences and tiny specks. Coins with rare dates are often fake as well, as counterfeiters usually do their research in identifying which items would be of most value to potential buyers.

“They make those look real good,” Bruner nodded. “If you have doubts, bring it here and let me look at it.”