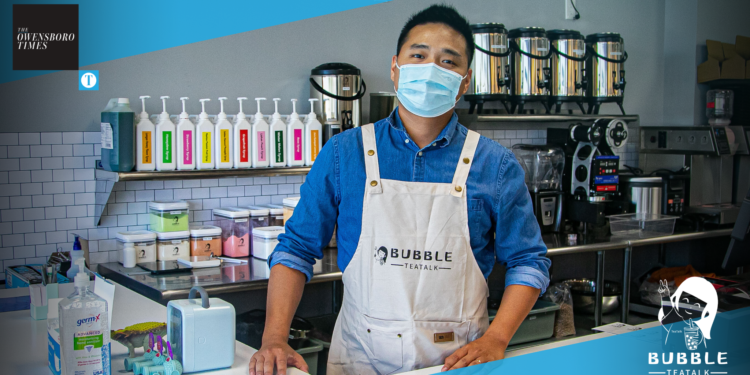 Bubble Tea Talk will officially open Wednesday on the east side of Owensboro. In addition to bubble tea drinks, they will also be serving fruit teas, smoothies, slushies, fluffy ice, and more.

Bubble Tea Talk is located at 3238 Kidron Valley Way, Suite 2, a few spaces down from Wasabi 54. The business is owned by Yao Liu, who is excited to bring something new to Owensboro.

“We began our journey in October 2021 as the first bubble tea store in Owensboro,” he said. “Bubble tea isn’t just a drink, it’s an attitude and a lifestyle. ‘Drink fresh, drink fun, and drink healthy’ is our mission. With our sincerity, we brought not only the great-tasting brown sugar bobas, but also the most natural bubble milk tea which is made from real tea.”

Bubble tea is a tea-based drink that originated in Taiwan in the early 1980s. Various flavors, sweeteners, and/or milk is added to the tea, and it’s then shaken to mix thoroughly.

Flavored tapioca balls (also called boba, and acting as an edible ball of juice) are then added. They sink to the bottom to give the bubble tea it’s “bubbly” appearance.

The drink comes with an extra wide straw so the boba can be sipped along with the drink. The boba can then be popped to release their flavor.

While most drinks are served in a cup as would be expected for tea, Bubble Tea Talk also offers “fluffy ice.” That means the drink is run through a machine that nearly freezes the liquid and shaves it into small pieces — similar to shaved ice but with a texture more like ice cream. The boba are then added to create a dessert in a bowl rather than a drink in a cup.

The menu is not yet posted on the Bubble Tea Talk website but can be found below.

There are nearly 20 toppings to choose from, including roughly a dozen boba flavors and a handful of jelly flavors.

Liu said while bubble tea has been a hit in states like California and New York, he knows it is still new for most people in Owensboro. He recommends going with the traditional drink with little flavoring on the first trip, then working up to adding more toppings and flavors.