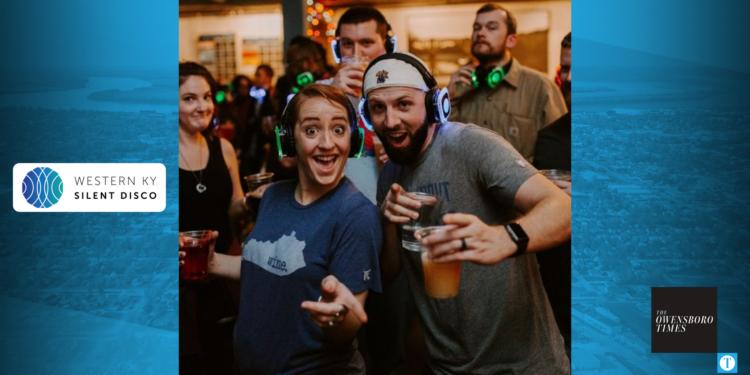 Western Kentucky Silent Disco offers a unique experience for anyone looking to host a modern dance party. The idea originated with the silent discos hosted by the former Mile Wide Beer Co., and it has turned into a full-scale silent disco DJ and equipment rental company.

Palmer Dempsey, owner of the business, was the taproom manager for Mile Wide. He said the events started through a partnership between Mile Wide and Louisville Silent Disco. He said shortly after the closure of Mile Wide, people were upset that silent discos might have gone away for good.

So at the start of 2022, Dempsey started his own silent disco business covering the western Kentucky area from Owensboro to Bowling Green and even to Paducah. Their events bring crowds from 200 to upward 450.

“For whatever reason a lot of people have a hard time getting out on that dance floor, but when you put the headphones on, I don’t know what happens inside of us, but we’re just more inclined to want to get out there,” Dempsey said.

All the music is played in each person’s headphones. WKY Silent Disco has 300 headphones, each able to switch between three different music stations — each represented by their own color — to choose from while the party goes on.

Dempsey said that sometimes a sea of one color can been seen for an iconic song like “Cupid Shuffle” and then it’s an array of colors in the crowd as everyone changes to their own music promptly after.

“It’s pretty awesome to watch people dancing to two different channels of music, but still dancing together at the same time,” he said.

The have hosted a few events already, and they are starting to expand into rentals where people can take the silent disco to their wedding reception or their backyards.

Their next Owensboro event is set for March 17 for a St. Patrick’s Day party at the Convention Center. Tickets are $7 for an early bird special and $10 closer to the date.